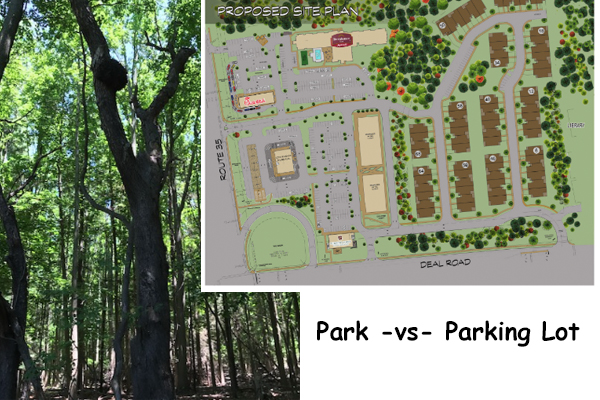 Ocean Township: A proposal for a possible development at Deal Road and Highway 35 has been under review for much of 2018, starting with usual public discussions and presentations by the developer. The property has been in the courts for a decade or so, when the land was placed under an ordinance overlay allowance. The ordinance set specific requirements if the land were developed.

As of today the property is still 32 acres of mostly wooded land, but is zoned mixed use for both commercial and residential development.

View of 32 Acres from Deal Road

Meanwhile the new owner and developer, Paramount Realty, has gone through several versions of the original "concept plan", presenting it to the townspeople in open discussion, using the high school auditorium to present the plan and get resident feedback. The latest plan includes a WaWa, Chik-Fil-A, Marriott Extended Stay Hotels, Turning Point and more "to scale" retail space. Previous plans included a big-box LA Fitness which is no longer part of the plan. The site will also includes 70 $500K townhomes and preserves a third of the property as green, open public space with a dog park and park-like areas. See http://oceantowncenter.com

The development is not without its detractors. Many residents feel the township has not done enough to alert people of the revised plans and pace of progress, although the town has said proper notification has been made.

Jacqui Wenzel of Deal Road has been a staunch opponent of the plan and is behind save32acres.org. Wenzel also started a Go Fund Me page to raise money to cover legal fees as she takes the charge forward to preserve the site for public park space. Her proposal is to use public monies raised by a township tax to acquire the property and add it to adjacent Palaia Park for public use and not private development. Wenzel's GoFundMe Page can be found <<HERE>>.

Given the property is privately owned and a suspended suit by Stop & Shop still could come back to haunt the township, a purchase at this phase looks unlikely.

Mellisa Peck wrote to us here at WORD on this subject. She spoke with Ronald Kirk, Twsp Director of Planning & Zoning. Kirk confirms that the planning board has only changed an ordinance redefining the use of the land, but says there is no application before the board at this time. The Ocean Council instructed the Planning Board to a review revisions to make certain the changes are consistent with the existing ordinance. Minor wording for clarification was done.

While there are plenty of rumors and speculation is-going, Kirk has confirmed that the board is not close to approving anything at this time. But he cautions "that property will get developed".

The final "how?" remains to be heard and decided.