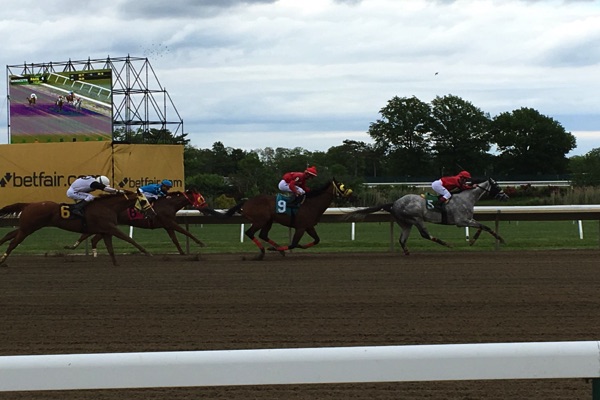 OCEANPORT: At the halfway point of the season, Monmouth Park's numbers are down in almost every area.

With 27 of the track's racing days completed, handle is down 3.8 percent, according to Oceanport Councilman Joe Irace

"Obviously it's very hard for Monmouth Park to stem the bleeding as they are competing against tracks in neighboring states which are bolstered from revenue from slot machines and casinos," Irace said. "It's the only track in the mid Atlantic without any kind of subsidy from slot machines or casinos."

Irace said the closest track in the same situation is located in Chicago while neighboring states such as Pennsylvania, Delaware and New York have alternative gaming options for track-goers.

With the Supreme Court reviewing New Jersey's sports betting case, there is hope that a new revenue stream could be added to the track, but that would not be in place until next season if the court rules in favor of the state.

The amount wagered on site is down 5.2 percent while off track sites are down 3.6 percent.

"A lot of that has to do with the field size which is down from 7.2 horses per race to 6.7 horses per race," Irace said. "Generally in racing, larger fields increase the amount of wagering."

"That's large for Monmouth Park, years ago they used to have waiting lists," Irace said.

Purses remain the same, but attendance is down 2.7 percent.

Monmouth Park's biggest race of the year, the Haskell Day, is scheduled for this Sunday, July 30. Irace said the race has a wide open field and no clear favorite which could help increase wagering.

Multiple stakes winner Girvin will look to take home the Haskell trophy against some of the top 3-year-olds in the country in the mile and an eighth event. New Jersey-bred Irish War Cry leads the charge after finishing second in the Belmont Stakes. He won the Grade 2 Holy Bull at Gulfstream Park in February and the Grade 2 Wood Memorial at Aqueduct in April.

Monmouth Park's gates will open at 10 a.m. on Haskell Day with first post scheduled for noon.