Chabad of the Shore Lights Chanukah Menorah at Pier Village 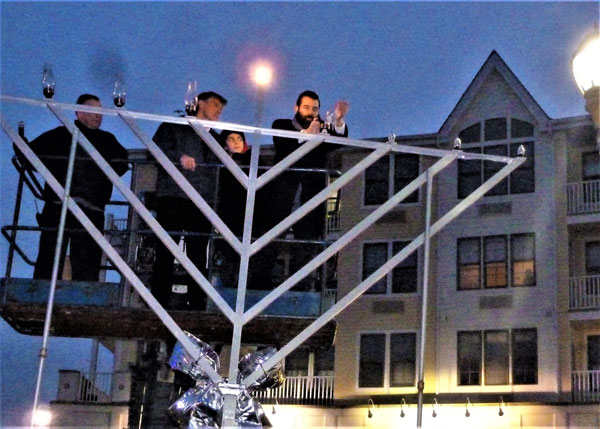 Long Branch: Once again at Pier Village the Chabad of the Shore celebrated the Festival of Lights, on December 6th at an outdoor greeting where some 100 celebrants, ages about three or so, to teens, and adults enjoying friendships.

This event, now annual, began a few years ago as Pier Village settled in and community events were brought there.

Rabbi Laibel Shapiro was the elder leading the ceremony on Thursday with a plan for a team of lift operators to raise the Rabbi to the candles above. The ceremony was delayed by a lift malfunction, but the city fire department headquarters stepped to the aid with a bucket truck, just in case.

As things turned out the original lift was fixed and used. Mayor John Pallone and his son arrived and both joined Rabbi Shapiro on the lift, helping to light the oil lamps on the menorah, a reenactment of the event 2100 years ago when a one day oil supply, needed for a war in progress, lasted for eight days, allowing the traditional population of Jews to win out over a group that tried to bring Grecian customs into the lives of all.

The present atmosphere reminds all of the coming of light from the oils that normally would have been exhausted if not the miracle.

Today the festivities are untended to bring the people together in common celebration, emphasis on the youth primarily but meant for all

Menorahs are lighted in each home in a ceremony led by the family head. The present practice adds fun to the celebration, treats like latkes and fun like the magician who delights the youngsters.

The Rabbi lit the lamps, bringing the bright light to all and the group singing a special prayer of the day.