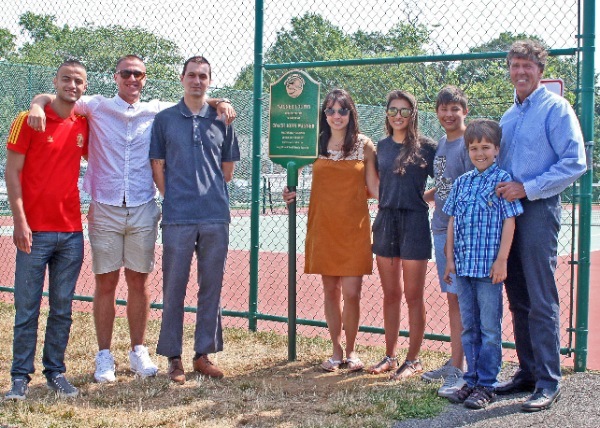 LONG BRANCH: In continuing support of youth athletics and healthy recreation the tennis courts at Manahassett Park were dedicated to the memory of deceased Recreation Department tennis coach John Wagner.

Coach Wagner was committed to the young people of the city, dedicating endless hours to their tennis play, a sport he loved dearly, said Carl Jennings, the city's Recreation Director at the ceremony on June 26 at the courts.

Joined by city Council members and Mayor Adam Schneider, a plaque honoring Mr. Wagner was unveiled, which reads in part that he was a "Passionate visionary ..." and was recognized "for his work with the Long Branch Youth Tennis program."

Coach Wagner had served for 15 years in his coaching capacity, passing away in 2010. The World War II veteran had served at Normandy and later was a professional in the contract engineering industry from which he retired in 1995.

"Even when he became ill he continued to help the youth as long as he was able," Director Jennings recalled.

It was a solemn moment on a bright sunny day at the the park, fittingly so.