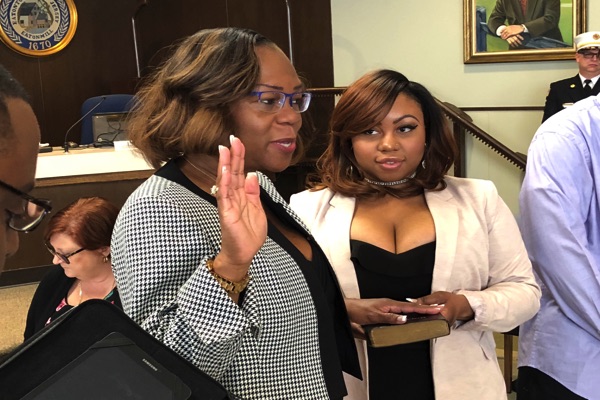 Councilwoman Bridget Harris was sworn in during the Eatontown Council reorganization meeting on Jan. 1. 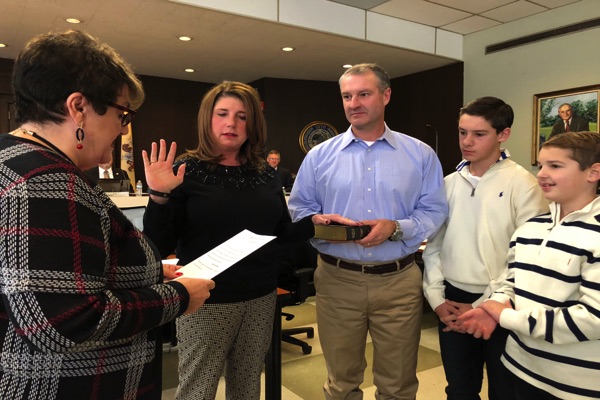 Councilwoman Jennifer Sherrod was sworn in during the Eatontown Council reorganization meeting on Jan. 1.

EATONTOWN: The first borough council meeting of 2018 brought many changes along with it.

Democrats Jennifer Sherrod and Bridget Harris joined the dais after repeating their oaths of office in front a big crowd of family and friends. Harris and Sherrod defeated incumbent Republicans Mark Regan and Donna Mazzella-Diedrichsen and give the Democrats a 4-2 majority on the council. Virginia East and Anthony Talerico are Independents and Mayor Dennis Connelly is a Republican.

Connelly welcomed them to council and said he hopes that the three parties can get along and accomplish things for the borough.

Andrew Bayer is out as borough attorney and was replaced by his predecessor, Gene Anthony. His appointment was unanimous.

A nonunanimous appointment was that of the borough architect. The council voted 4-2 to appoint Netta Architects to replace Settembrino Architects which has served the borough over the last few years. Talerico and East voted against the appointment of Netta and asked that both Settembrino and Netta be named as co-architects. Their motion to do so was defeated after they were only the ones to vote in its favor.

Councilwoman Patricia May was named Council President; the first time a woman has been named to that position, according to Connelly.

Connelly then reported on the state of affairs in the borough including all the proposed development at Fort Monmouth, the construction of new borough businesses and the planned updates to some borough-owned buildings such as borough hall and the Eatontown Department of Public Works.