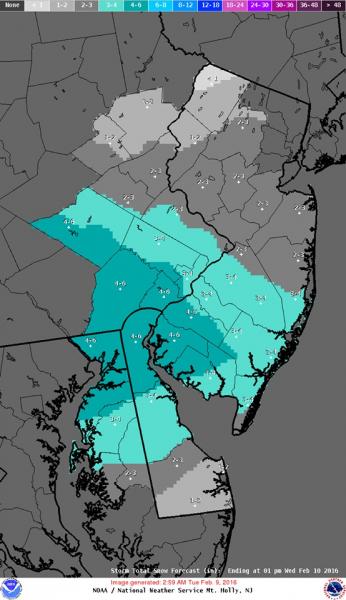 Monmouth County is under a costal flood advisory, but the winter weather advisory that was issued yesterday has been lifted for the area.

The Word On The Shore area is now only expected to see 2 inches of snow.

A Coastal flood warning is therefore in effect for the New Jersey and Delaware ocean and bay coastlines. A coastal flood advisory has been issued for counties along Chesapeake bay.

Several inches of snow accumulation are expected today through this evening. The forecasted snow totals have decreased some since yesterday afternoon. A winter storm warning remains in effect for Delaware and Chester Counties in Pennsylvania. A winter weather advisory is in effect for the remainder of the region outside of the Poconos and Northwest New Jersey.