Future Plans For Monmouth Mall Include Indoor, Outdoor Mixed Use 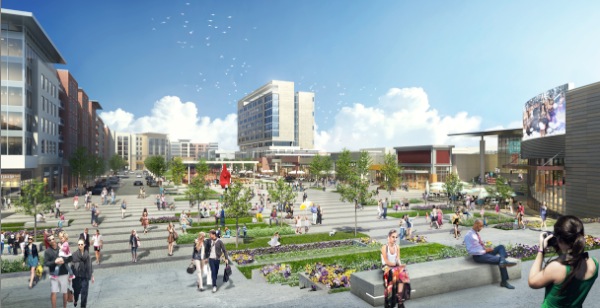 EATONTOWN: Housing, fine dining and even a grocery store could one day be in the area that currently contains the Monmouth Mall in the borough.

Kushner Companies, the new 100 percent owner of the property located at the intersection of Routes 35 and 36 in Eatontown, presented a plan to turn the mall into and indoor/outdoor mixed use development known as the Monmouth Town Center at the Feb. 10 Eatontown Council meeting.

"We want to emphasize that this is a concept review and this is a process that is still in the design phases," attorney Patrick McNamara said.

He said the retail industry is in decline and that the plan is to create something that will attract a variety of clientele.

RTKL, the firm that is designing the Monmouth Town Center, has created several projects that are similar to the vision for the Monmouth Mall area, but the center would be the first of its kind in New Jersey.

"We want to build a community," said Robert Berry, Vice President of RTKL. "We want to incorporate live, shop and play elements...and all that together will reinvent the visitor experience, making it not just a re-polished mall, but a repurposed mall."

The plans include four 4- and 5-story residential structures with associated parking, indoor and outdoor retail and biker- and pedestrian-friendly greenspaces and streets capes throughout.

The current mall would be renovated and many of the anchor stores remain in the preliminary plans including the movie theater, Macy's, Lord and Taylor and Boscov's.

He said his client understands that parking will be a major topic of concern and that a traffic expert has already been hired. He also said the fiscal impact of the development, including the number of school-age children it would add to the borough, will be examined and presented to the borough.

Residents in the packed Eatontown Council chambers weighed in on the negative and positive aspects of the proposed project with some saying that it is "just what the area needs" and others saying it is "too much" for the area.

"It's an interesting concept, and I certainly agree with the mixed-use concept..my only concern is the intensity of the development," resident Ted Lewis said.

"This is a multi-year process," McNamara said.