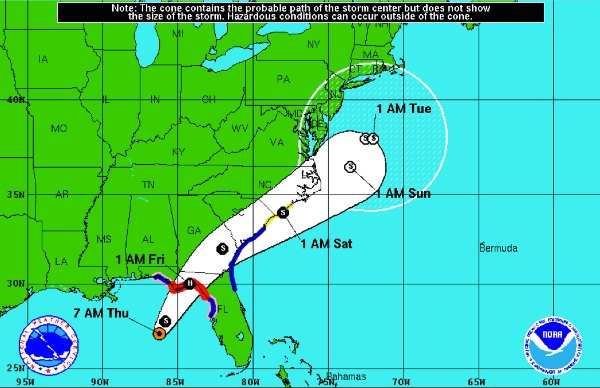 It's officially hurricane season on the east coast, and the first threat is an early one with Tropical Storm Hermine.

The National Weather Service is reporting that Hermine's forecast track from the National Hurricane Center shifted east with their latest update, but that the track is still uncertain.

Hermine is still a tropical storm, but is expected to intensify into a hurricane before making landfall in northwest Florida early Friday, Sept. 2.

The National Weather Service states that it could affect New Jersey with waves, wind and rain.

"Hurricane Gaston and Tropical Depression Eight continue to churn the waters of the western Atlantic, with a moderate to high risk of rip current formation into Friday," the National Weather Service reports. "Then Tropical Storm Hermine, currently located over the Gulf of Mexico, is expected to move north toward the mid-Atlantic region this weekend, bringing with it a renewed threat of rip currents through the busy Labor Day weekend."

The strongest winds should occur mid Saturday through Monday, Sept. 5.

The heaviest rain is expected near the coast, but specific rainfall amounts are highly dependent on the eventual track of the storm. Rain expected to begin on Saturday and continue through Sunday.

Given the current forecast track of Hermine, a storm surge is not expected with this system in Delaware or New Jersey.

The next briefing from the National Weather is expected to be released on Thursday afternoon, so we'll update this story if there are any major changes.