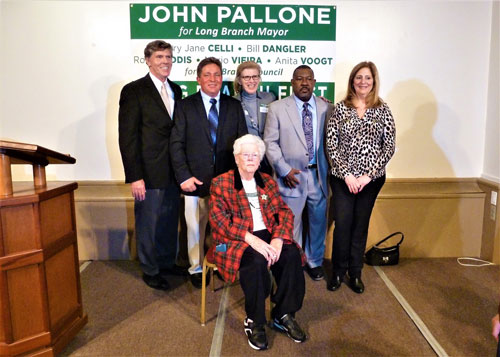 Long Branch: The free spaghetti dinner at the Long Branch Italian American Memorial Association on March 6th was to host the election Campaign Kickoff for candidate John Pallone for the May 8 Long Branch Mayor and Council Race.

Pallone had been recently named the Amerigo Vespucci "Man if the Year". That Friday event was held at the Ocean Place Hotel and Spa. Pleasantries and humor was the order of the day.

A smiling Mayor Adam Schneider congratulated John at the Amerigo Vespucci for his service to the community. The two shook hands as respectful adversaries for the mayor post. Adam is seeking re-election.

The Campaign Kickoff was at the IAMA home on West End Avenue on Tuesday with close to 300 supporters joining the dinner. The hall was filled with well-wishers all evening until weather and cautions from the state offices called for an 8:00 p.m. "get home safely".

Rev. Dr. Lesly Deveraux began the IAMA ceremonies with a prayer of welcome.

Pallone then spoke briefly, remembering the need to break early. His running mates listened as he told of his goals for his city; he is a lifelong resident.

He and his team would represent all the people of Long Branch, and be open, responsive and inclusive, because everyone's opinions matter "We want to listen, learn and lead."

Turning to his team mates with "Long Branch First" on the banner behind them he told the crowd "We're running together to do better, because you deserve more".

Among his goals: "Keeping the streets clean, no mattresses and junk at the curbs for days or more, and cleanup of abandoned properties with landlords liable. Revitalize the neighborhoods, and bring back their appearances and character."

He wants tighter financial spending and controls, avoiding wasteful spending. He plans a "Shop Long Branch" program with a city-wide rewards card that will give residents tax rebates. A "Citizens Service Center" will bring basic services close to where people live. Other tax saving programs were mentioned.

He introduced Council member Dr. Mary Jane Celli, who has served since 1994, and is an Air Force veteran, and a Women's Club officer, Elks, VFW, and American Legion member. She told the crowd she stands strongly for a cleaner city.

Candidate Bill Dangler emphasized keeping the city first in education, financial matters, and putting the people first. The NAACP President is a supporter to children's sports, and a Senior Investigator for Monmouth County Social Services.

"We are in this together. Here for everyone" said Board of Education member Rose Widdis, active in the Star of the Sea church and recent honoree of the Latino American Society. "It is all about the community" she told the audience.

Candidate Mario Vieira, a foreman with Bricklayers Union #4 and Past President of the LB Portuguese Club told the attendees "We will listen." His current impact in the city includes coaching and traveling with the Youth Soccer team.

Last to speak, Dr. Anita Voogt said her mission as a council member is "to give back to the community." She is Executive Dean at Brookdale College and a Senior Executive at the Long Branch location. She is also active on the Save Ocean Avenue Committee and recipient of the 2013 World's Quiet Hero award.

The candidates went about meeting the audience in closer conversation, with the eight o'clock hour coming soon after the speakers had shared their views.