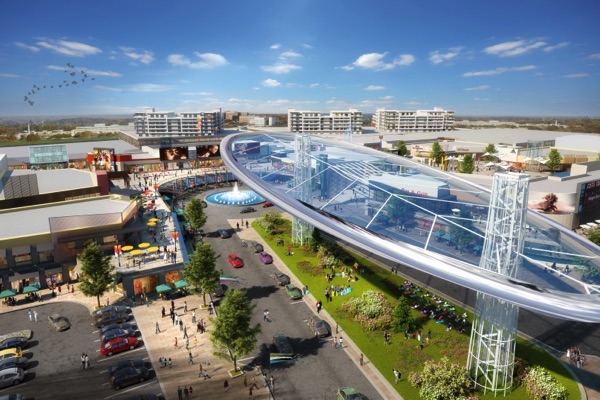 EATONTOWN: A new plan for the redevelopment of the Monmouth Mall is in the works by property owner the Kushner Companies and their new partner Rouse Properties.

The partners announced plans this week for the revised project called The Heights At Monmouth, "a dynamic, state-of-the-art mixed-use destination unlike any other in New Jersey," according to a release from the Kushner Companies.

"This long-term investment in Eatontown will transform Monmouth Mall into a 24/7 attraction unlike any other in the state," said Laurent Morali, President of Kushner Companies. "We're thrilled to partner with industry leader Rouse to deliver a cutting-edge project that will serve Eatontown, Monmouth County and New Jersey for years to come."

Morali became president of the company after Jared Kushner stepped down to become a White House adviser for his father-in-law President Donald Trump.

Rouse Properties has a portfolio which includes projects across the country where they took an existing structure and repurposed and modernized it, including the conversion of several indoor malls into open air retail shopping areas.

"Like us, Kushner has a proven track record of successfully identifying and unlocking the inherent value at its assets through strategic renovations and property updates,"said Brian Harper, Chief Executive Office of Rouse Properties. "Throughout this project, we will leverage each other's deep redevelopment and transformational expertise to deliver an innovative community-focused destination center that truly revolutionizes the way people live, eat, shop and unwind in Monmouth County and beyond.

The joint venture is currently working on a site plan application and anticipates starting construction in 2018, according to the release from the Kushner Companies.

Eatontown Mayor Dennis Connelly said no plans have been filed with the planning board as of this week, but said the developers are eager to get the process started.

"They are motivated to move forward to get this project going," Connelly said.

Kushner Cos. became the sole owner of the mall after purchasing Vornado Realty Trust's 50 percent interest in the summer of 2015. Following their purchase of the property, they presented a plan in February, 2016 to turn the mall into and indoor/outdoor mixed use development known as the Monmouth Town Center. In addition to the retail already in place, Kushner Companies was also looking to add a residential component, recreational uses, office space, healthcare facilities, a hotel, a multipurpose plaza area and a market.

The Eatontown Council voted down an ordinance that would have changed the zoning in the area to allow this development to be built following site plan approval from the Eatontown Planning Board. Their intention was to scale the project down, increase buffers to nearby homes and make other adjustments.

However, before the borough's professionals could begin crafting a new ordinance, a representative from the developer announced at a public meeting last month that the mall would remain "as is."

Later, the Kushner Companies did end up stating that they had a revised plan for the mall, which ended up becoming the concept announced this week.

A new ordinance, which created a new mixed use regional center zone where the Monmouth Mall currently sits, was approved by the Eatontown Council on Sept. 14, 2016. The 5-1 vote came following a lengthy public hearing where the majority of the residents in attendance spoke out against the ordinance, with most stating that the increased traffic and 700 apartments would negatively impact the borough. Councilman Anthony Talerico was the only member of the council to vote against the ordinance.

A group of Eatontown residents who oppose the ordinance to rezone the Monmouth Mall filed a lawsuit against the borough in an effort to overturn it last October.

The three-count complaint was filed in Monmouth County Superior Court in October by residents Evelyn Guerra, Judith Bretzger, Barbara Denegar and Sara Breslow and seeks a ruling to declare the ordinance null and void due to "violations of the Municipal Land Use law, procedural deficiencies and violations of the Open Public Meetings Act," according to the complaint.

Connelly said the lawsuit is pending in Monmouth County Superior Court and that there is July court date scheduled. If the court sides with the residents, it would likely slow the process of presenting the revised plans to the Eatontown Planning Board.