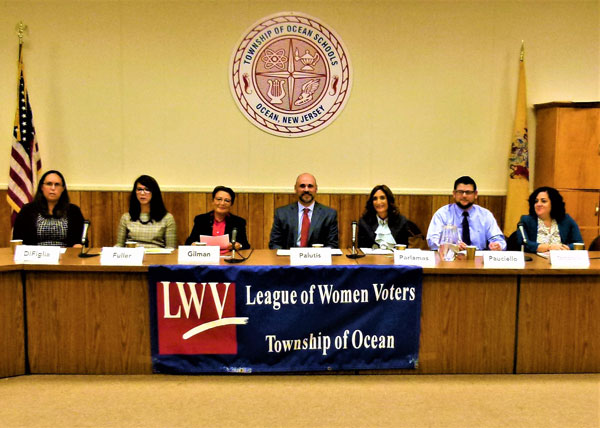 Ocean Township: With just three weeks to the November 5 election of the Ocean Board of Education, the Ocean League of Women voters conducted a candidate discussion meeting at the former Oakhurst Elementary School, now the administrative offices of the district's staff and Superintendent.

About 100 residents came to hear the ideas the candidates held as to what their qualifications and interests each has about running the schools across the district.

Anne Torre was the emcee from the Red Bank LWV, a means the LMV group uses to further assure openness n-and fairness by using someone outside the election area. LWV President Peggy Dellinger introduced Anne, who then explained the discussion rules to the audience and the Start segment, the responses by each candidate to questions submitted by the LMV and members of the audience.

After intros, each had a specific, times period to respond. Torre read the questions and guided the allotted times.

Question #1 was asking about what each candidate believed to be the strong and the weak areas in the districts system. While there were some common threads of priorities, each also had a feeling for their own ideas coming from their skills, backgrounds, and experience in similar roles in schools, careers and businesses, including volunteer activities.

That mode was the same for the 8 challenging questions. Among the subjects, funding was one of the most referenced, particularly with the growth in population of children-less residents and especially the recent experiences of losing funds from losing the Loch Arbor students, and the State's taking very sizeable cuts on the monies it has provided in the past, to the point where it appears the State's contributions are lower than a long time ago, more than a decade.

Security was another item, with police assigned to the schools regularly as assigned security agents. While each acknowledged the need with incidents throughout the nation on the minds of all. Different ideas on the how to do it were voiced with the overall thought that the subject would take careful, collective ideas and decisions making, including schools, students, police guidance, school teachers roles among the thoughts.

The 2-hour intense discussion was taped to be broadcast online at LWVT0.ORG, and on the town's websites with the showing to be available by Wednesday of this week.

The candidates were Catherine DiFiglia, Janice Fuller, Irene Gilman, Michael Palutis, Denise Parlamas, Scott Pauciello, Natalie Tortorello and Gino Delomo (who was not available at the meeting start, so his opening remark were provided by Ms. Torre.)