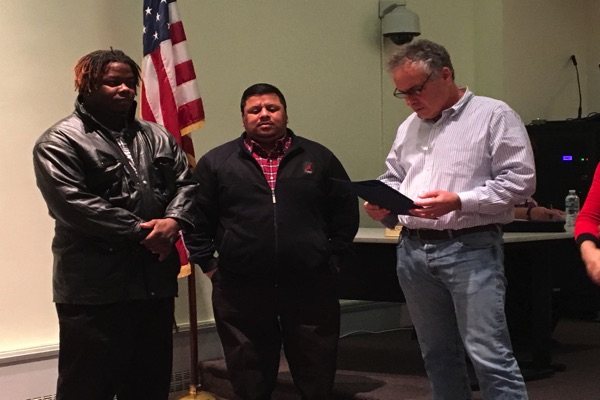 Seman-Tov school bus aide Nate Woolbright and driver Jose Ramirez were honored by the Long Branch Council on Feb. 14 for their efforts in helping save two young girls from being attacked last month.

The two men were driving when they saw a girl fighting with a man who was trying to drag her away.

"Concerned for her safety, they turned the bus around to see if everything was alright and saw the girl running down the street," Mayor Adam Schneider said. "While attempting to get the girl on the bus, they noticed the man attacking another girl and went to help the second girl and immediately called the police."

"Much gratitude and appreciation goes to Jose and Nathaniel for coming to the aid of two school girls who were in distress," Schneider said. "Their actions will be remembered and should serve as an inspiration to others."

Schneider said Feb. 14 will now be known as Jose Ramirez and Nate Woolbright day as they were awarded with a commendation for their actions.