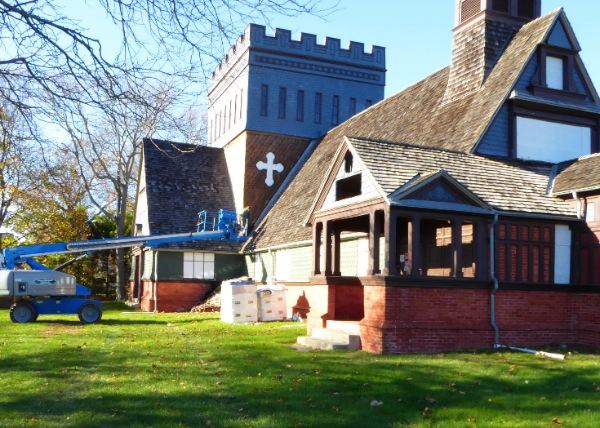 Among the local projects receiving grant funding are two historic structures in Long Branch; the Ross Island stone hut and the Church Of The Presidents.

The types of projects eligible for funding are preservation, restoration or rehabilitation of historic structures, usually 50 years or older, and which are accessible to the public. The program covers essentially structural work for projects commonly known as "bricks and mortar" undertakings, according to a release from the county.

Church Of The Presidents

The Church of the Seven Presidents, located at 1260 Ocean Ave., gets its name from those who once worshipped there, including presidents Chester A. Arthur, James Garfield, Ulysses S. Grant, Benjamin Harrison, Rutherford Hayes, William McKinley and Woodrow Wilson.

Once the Long Branch Historical Museum, it fell into disrepair and closed to visitors. The windows were placed in storage and are now being put back.

The last significant work on the interior was done about 6 or 7 years ago when the belfry was renovated and certain wooden stanchions replaced.

The grant totals $3,750 and will be used by the Long Branch Historical Museum Association to make exterior renovations to the building.

The Whale Pond Brook Watershed Association has been given $3,328 to continue the restoration of the Ross Island stone hut located in the middle of Lake Takanassee.

Ross Island is small island located at the western end of Lake Takanassee which contains a 116-year-old stone hut that was originally part of the estate of a local civil engineer P. Sanford Ross. It is now owned by the city.

The grant funds will be used to replace the stones that were removed during the process of getting rid of the vegetation that was once growing over the hut.