Long Branch Honors Its Own Librarian Of The Year 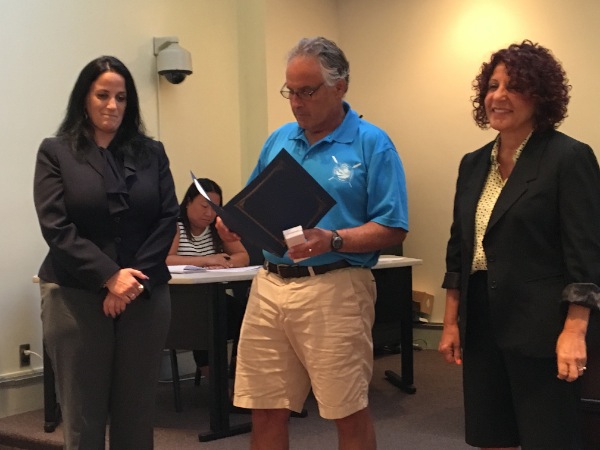 LONG BRANCH: Not too many people are given the key to the city and have a day named after them on the same night. Long Branch Free Public Library Director Tonya Garcia is one who can now claim both of those things.

Garcia was named 2016 Librarian of the Year by the New Jersey Library Association earlier this summer and was honored by the Long Branch Council during its July 26 meeting.

"To me, Long Branch represents the ideal public library," Garcia said after being handed the key to the city and a proclamation naming July 26 Tonya Garcia Day by Mayor Adam Schneider.

Schneider said Garcia's fellow employees lover her and the number of people who visit the library and utilize all its services has increased under her leadership.

Councilwoman Joy Bastelli said the city is lucky to have an employee who does so much for so many people.

"I'm just grateful for that...having her as part of our city makes it a better city," Bastelli said.

Garcia began working at the Long Branch Free Public Library in 2004 and was appointed Library Director in 2013. Since that time she has started several programs in the library such as a Virtual Career Center and Fresh Start Re-Entry programs.

She is the first librarian from Monmouth County to receive the honor of Librarian of the Year, and her selection comes as the Long Branch Free Public Library celebrates its 100th anniversary.