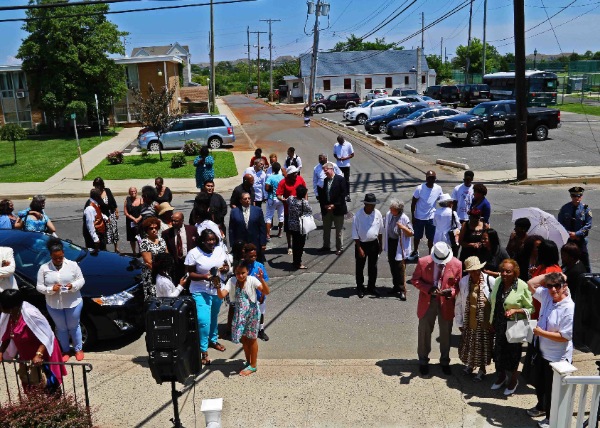 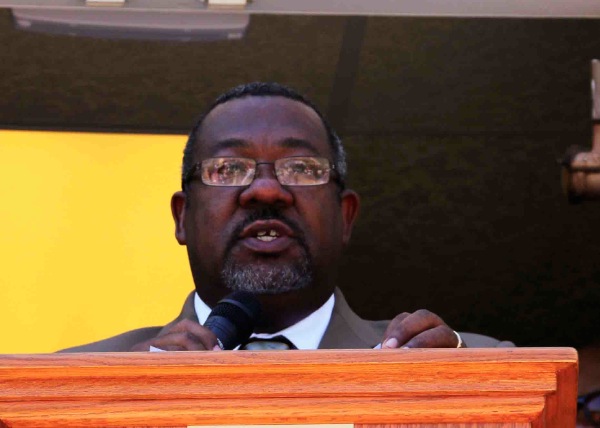 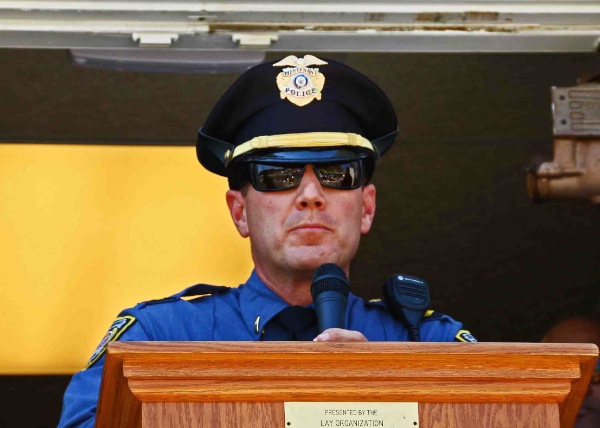 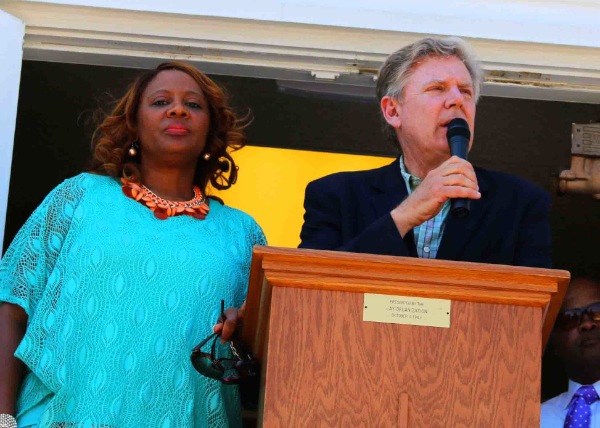 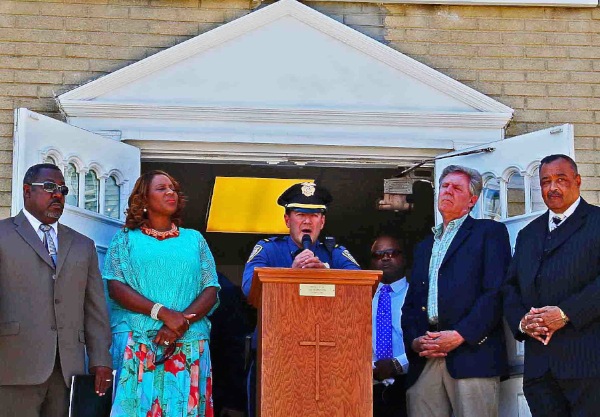 LONG BRANCH: The gathering of community members requested by the Greater Long Branch National Association for the Advancement of Colored People was set for 1 p.m. on Sunday, July 17 at the Trinity AME Church on Liberty Street.

The time had been set to accommodate the time the majority of local churches would have had for their Sunday services which included Second Baptist, the Urban Ministerial Alliance, National CSI, Men Make a Difference, Fidelity Lodge #42 and the community in all.

It was a glaringly bright day, hot enough for church-worn jackets to come off and ladies to don wide brimmed bonnets to protect faces from the sun. Sunglasses were prevalent and several stayed under the small trees next to the building.

The purpose was for the NAACP to deliver its "stance on the recent spate of shootings of African Americans and Law Enforcement Officers throughout the country" said Lorenzo "Bill" Dangler, Long Branch NAACP President.

Trinity AME Rev. Lesly Deveraugh welcomed the gathering and introduced Mr. Dangler. She explained the event was arranged by contacting the churches, the Ministerium, and other community groups and individuals. All were welcome in addition to direct invitees, since the mission was to address the community, the speakers included members of the city police department represented by Lt. Joshua Bard, Special Operations Commander.

Bill Dangler spoke to begin the discussion. He said the NAACP denounces "the senseless shooting that have taken place over the past few weeks." He added that it would be foolish to think racism does not exist all across the country." He said we are at a point which divides us rather than the more paramount reaching for that which unites us (the country).

He spoke of the graphic and horrific images of these times, and said it is understood that the reactions of African Americans are negative, yet he said we should not jump to conclusions and should allow investigations to determine right and wrong, even as the same morning more killings were being reported in Baton Rouge.

He spoke of Dallas and the police killed there, and the impact, at least for now, in terms of how law enforcement views their jobs and the general community.

"We don't condone the actions of any individual or group that choses to resort to violence or vigilantism in order to justify injustice committed." He also denounced any rogue officers' actions.

He said we don't know all the facts but "we do know the men and women we trust to protect us are now clearly targets and you can only imagine how they and their families across the country feel today." He said the police officers "do their jobs in a professional manner and their motivations is to serve and protect."

Recounting several recent events, he said "it is time for people of good will to come together". He called for honest discussion on Civil Rights" in matters of: "Race; bias hate crimes; true police community relations; depriving people of their basic human rights; respect for others; equal justice under the law."

Rev Deveraugh spoke briefly that it is her way to call the police when they ae needed, trusting on them to do what they have promised to do here in Long Branch to assure our wellbeing and safety.

Lt. Josh Bard addressed the assembly as a lifelong Long Brancher, a graduate of Long Branch High and 8 years on the city's force. He said 41 of the 85 officers are originally from the city, having growns up here and also matriculated through LBHS. He said they live here as do many others who now serve the force, a department requirement.

He spoke of their community commitment and the volunteers' work they do with Little League, basketball, soccer and other sports. They also run the Police Exploders, a youth endeavor from which some of the regular force today have come.

The department runs a City Police Academy begun this year for residents to see what the job of the police officer is all about. They are taken on tours of an officer's day, the organization and how the department operates procedurally, the legal system it runs under, the gang situation and issues, dangerous drugs, firearms, domestic violence and abuses, their hiring process, investigations, traffic management, the government and council roles.

For more info, contact the department and consider enrollment in the upcoming October program which is in the evenings at no charge to participants. You have to be 18, and of good character. There is a background check and a commitment to attend 8 classes over the 8 week program. They idea is for residents to know their officers and vice versa. It builds confidence and trust.

Congressman Frank Pallone spoke to the group about the countrywide problems occurring today and the need for the community to understand and get involved in changing the situation country wide, but also here at home, where the problem can arise if not attended. "Mass shooting are getting worse" he said. Hate is becoming a situation where people do not respect each other. He said it takes action to turn the hate around. In Washington the matter is on the table, yet it must be addressed everywhere. He spoke briefly about assault weapons under study in the Capital. He asked for community support to addressing those issues.

Rev Gibson spoke of the need to come together, all the churches and the people. He said the various followers share the same ideas of respect, caring for each other, and trust. His words carried the thought expressed in the past by Dr. Martin Luther King. Hate will not cure hate. Only Love can cure it.

The heat of the day overwhelmed one attendee but prompt caring and help got him back on his feet. The prompt ambulance service took him for aid at the hospital and some said he was doing well even as he left the church gathering.