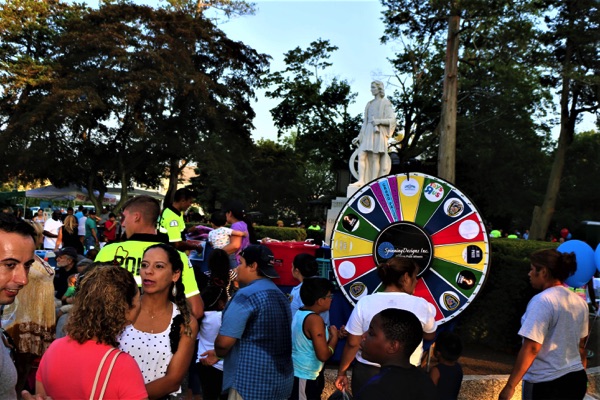 The Christopher Columbus statue can be seen in the background of this photo.

LONG BRANCH: The Greater Long Branch NAACP is setting the record straight that it has no intention of removing a statue of Christopher Columbus in the city.

Greater Long Branch NAACP member Bill Dangler said he received a call from a member of local Hispanic group asking to have the statue, which is located in Slocum Park on Broadway, removed. Word On The Shore has learned that the group's name is The Organization for Culture of Hispanic Origins (OCHO), a 501(c)(3) non-profit which "aims to provide education and support to the Hispanic communities, through the use of educational programs and seminars, mental health and substance abuse counseling programs, volunteer activities, and more," according to the group's web site.

Columbus has been criticized of enslaving the native Taino people of Hispaniola.

Dangler said there have been rumors that the NAACP is accommodating OCHO's request, but he said that is not the case.

"The NAACP is not here to have a statue removed, we're not considering having the statue removed, it's not something we are concerned with," Dangler said at the Sept. 12 Long Branch Council meeting.

Dangler said his group is more concerned with teaching the history of the people who have been immortalized in Long Branch through statues and monuments.

"We are more in favor of teaching the history of that person, be it good or bad," Dangler said. "It's still our history, because our children do need to know what they did stand for. There's all types of history in Long Branch and before we start renaming things or taking things down we need to teach our history and move on."

The statue was donated to the city by "Americans of Italian Extraction" in 1961, according to the inscription on its base.