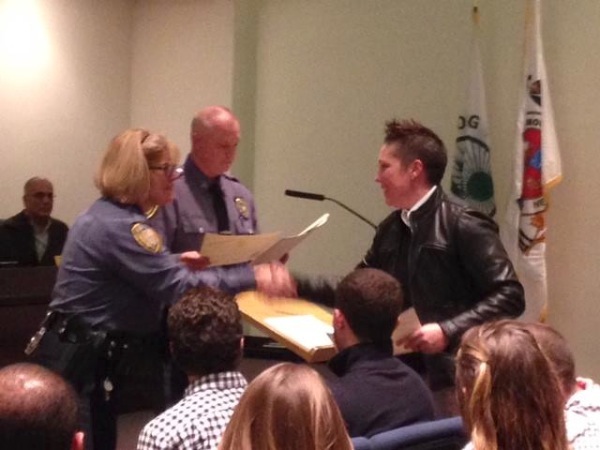 Members of the Long Branch Police Department were given commendations for various acts in 2015 during the Dec. 22 Long Branch Council meeting.

The following is a list of awards and recipients:

-Honorable Service
DLt. Jeffrey Grippaldi
Det. Joseph Spitale
Det. Richard O'Brien
Det. Nicholas Romano
For: "Exceptional teamwork, dedication to duty and professionalism leading to the arrest of a local drug supplier on August 24th, 2015. Your efforts removed 5,359 decks of heroin, with an estimated street value of over $40,000.00, from the streets of Long Branch."

-Unit Citation
Sgt. Antonia Gonzalez
Sgt. Brian Garrett
Cpl. Michael Vogler
Det. Richard O'Brien
P.O. Jennifer Gant
P.O. Christopher Walls
P.O. Patrick Vaccaro
P.O. Omar Akel
Dispatcher Hope White
For:" Promptly, professionally and bravely effecting the arrest of an armed, known gang member on November 7th, 2015, during what began as a motor vehicle stop. Your swift and accomplished efforts allowed for a peaceful resolution without any injuries and led to the removal of a deadly weapon from the streets of the City of Long Branch. The teamwork put forth by you and your unit in this case was exemplary."

-Letter of Commendation
DLt. Jeffrey Grippaldi
Det. Joseph Spitale
Det. Richard O'Brien
Det. Nicholas Romano
For:..."the exceptional manner in which you performed on July 25, 2015 in connection with the arrests of two career criminals involved in the manufacture and distribution of narcotics. The extensive investigation which you conducted culminated in the seizure of 250 decks of heroin and 3.5 ounces of crack cocaine..."

-Letter of Commendation
P.O. Omar Akel
For: "exceptional manner in which you performed on December 3, 2015 in connection with the arrest you made following a motor vehicle stop. Your keen observation skills and exemplary skill allowed for the removal of a shotgun, a rifle, nearly 400 rounds of ammunition and a large amount of marijuana from the City streets."

-Letter of Recognition
Lt. Thomas Shea
Cpl. Thomas Hueston
Cpl. Joseph Graziano
For..." the outstanding manner in which you performed on March 5th, 2015 upon responding to a report of a woman in labor inside of a motor vehicle during winter storm Thor. The swift and valiant actions in the emergency response and care you provided to the mother and newborn child may have ultimate saved the child's life..."