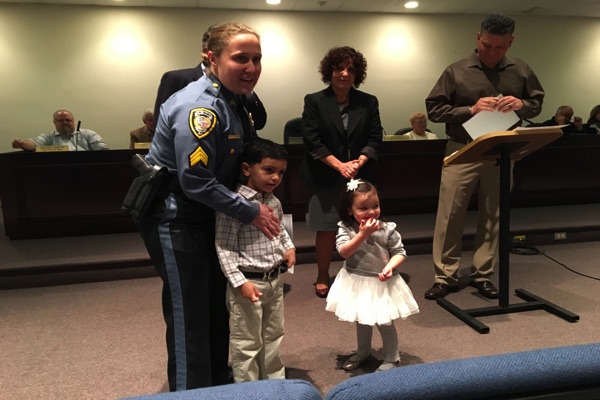 Long Branch Police Sgt. Heather Valdes was commended for her act of heroism where she saved a girl from drowning in a pool. 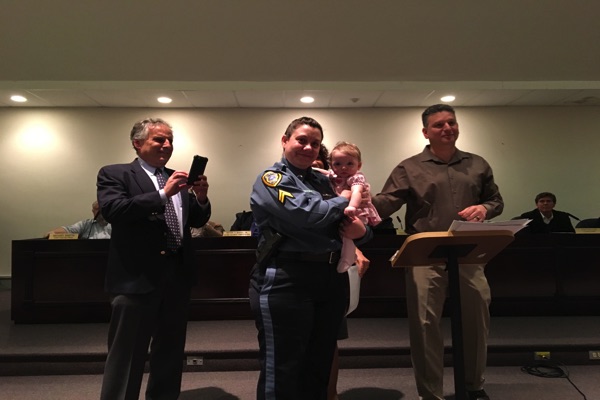 Long Branch Police Cpl. Jennifer Gant was recognized for helping save the life of a woman who was 8-months-pregnant.

LONG BRANCH: Several of the city's police officers were recognized for their various acts of heroism in the line of duty, and in one case, off-duty.

The city held a commendation ceremony for the officers during the March 28 Long Branch Council meeting as Long Branch Director of Public Safety presented each officer with a certificate and told the packed room about their outstanding service.

• Lt. Jorge Silverio was honored for helping solve a string of burglaries. He was able to locate the suspect, who fled from him and dropped a gun, and eventually track him down with the help of the city's K-9 unit in Ocean Township.

• Sgt. Heather Valdes was recognized for helping save the life of a little girl who fell into a pool. Valdes brought the little girl and her brother up Swith her to receive her award.

• Sgt. Robert Bell and other officers were thanked for helping stop a potential child abduction when a man tried to abduct three young girls earlier this year.

• Cpl. Jennifer Gant was recognized for helping save the life of a woman who was 8-months-pregnant and was not breathing and did not have a pulse. The woman recovered and was able to have her baby, who Gant carried in her arms as she received her award.

• Officers Matthew Widdis and Brian Oliveira were thanked for helping save the life of an intoxicated woman who had walked out onto a roof and was threatening to jump.

• Officer Pat Joyce, who was off-duty at the time, was able to arrest a man who had just stabbed another man at the Eatontown Sawa.

• Several officers including Officer Jesus Otero, Det. Richard O'Brien, Det. Jake Pascucci and Det. Nicholas Romano were recognized for working together during a month-long investigation that ended with the arrest of 11 people who were running a drug and prostitution house in the city.

• Special Officer Daniel Cunha was honored for subduing a man who was causing a ruckus in a grocery store and had assaulted another officer.