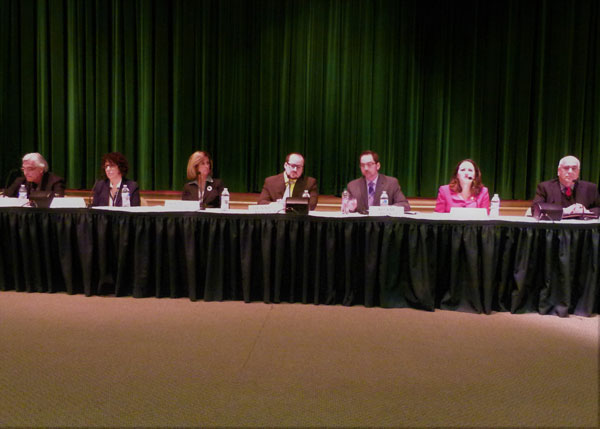 Sharon Steinhorn called the debate to order last night with an explanation of rules and seeking the cooperation of the audience to minimize any disruption of the discussion.

The team of John Pallone and his slate of council candidates was not available last night due to previous commitments, leaving the debate program to just two of the three mayoral candidates: Mr. Avery Grant and incumbent Mayor Adam Schneider.

Avery Grant was first to speak, outlining his goals as a candidate for mayor and qualifications for the position. Grant's fundamental goal is to bring back the Long Branch community to its standards of years past. Neighborhood people across the city working together on community programs serving teens and seniors. He cited celebrations like the International Festival that brought together multi-ethnic groups and people of all ages to those community events.

He wants to see more financial programs that serve the community, focusing on jobs as a prime example. He closed with a quote from his father that "God made people to love people". A primary theme to achieving his team's goals.

Mayor Schneider placed growth and good financial management in tough times as high on his team's agenda for the future of Long Branch. Successfully achieving city council goals to benefit the city included a focus on community safety with a strong police force.

Schneider also stressed long range city planning as being of utmost importance in continuing to achieve successes in the community.

All seven council candidates had their time to speak in detail of their backgrounds and qualifications for office. Roughly 150 residents turned out for this first debate.

The absence of the Pallone slate was viewed by several speakers as unfortunate given their positions on governing the city were absent from the debate.

The next debate is scheduled for May 1st at the Long Branch High School on Westwood Avenue. All 3 teams are expected to participate.