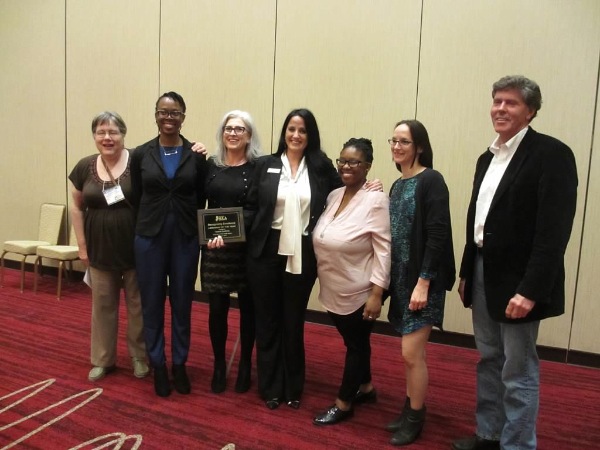 LONG BRANCH: The following is a press release from the Long Branch Free Public Library

Tonya Garcia, Director of the Long Branch Free Public Library was honored on Tuesday, May 17 as the 2016 Librarian of the Year at the New Jersey Library Association's annual conference in Atlantic City.

The award was created to recognize exemplary recent achievement by a working New Jersey librarian making a significant contribution to the profession. The Librarian of the Year serves as a role model, enhancing the image of librarianship and advancing the positive visibility of libraries to the community.

Tonya Garcia is a native of Monmouth County, New Jersey. As a teen mother, she spent most of her early adulthood as a stay-at-home married mother raising four sons. In 2004 she relocated to Long Branch and created Team Jump Off, a nationally recognized organization that ran in her own home, which worked to empower dozens of urban youth to take responsibility for their future through civic engagement and personal growth opportunities.

It was then she also started work at the Long Branch Free Public Library. Soon after being hired as a computer lab monitor, she was twice awarded the Laura Bush 21st Century Diversity Recruitment Scholarship. The scholarship gave Tonya the opportunity to work toward a bachelor's degree at Thomas Edison University and a Master of Library and Information Science Degree from the School of Information, Rutgers University.

During her early career at the library, Tonya Garcia championed diversity services in her community and under her initiative, Long Branch was one of the first library's to create a virtual Career Center. Her initiatives such as the Back to Work Initiative, Virtual Career Center, and Fresh Start Re-Entry programs have all been referenced both statewide and nationally. She has trained staff throughout NJ and has been invited to speak at numerous conferences and webinars including the NJLA Annual Conference, the ALA (American Library Association) Annual Conference and was invited by the New Jersey State Library to sit on a panel, along with NJ Deputy State Librarian Kathleen Pfeiffer, at the Garden State Employment and Training Association's 31st Annual Conference.

In 2014 the Long Branch Public Library was one of three libraries awarded the Innovation Award by the New Jersey State Library. Ms. Garcia has had numerous articles published in newsletters and other publications and in 2013 was awarded a book contract by ALA for a book she co-authored, Reaching Underserved Communities in Your Library.

In 2013, Tonya was appointed Director of the Long Branch Free Public Library and has worked diligently to promote the library as a community anchor, with a special focus on building and strengthening relationships with city departments, businesses and organizations. In October she worked with the School of Social Work at Monmouth University to launch the brand new social work initiative in the library, Community Connects. The library now serves as a point of service for many social service agencies and also has a social work intern in the building three days a week to answer questions. Tonya now serves as a NJ Mentor and a mentor for Reforma, in addition to serving on numerous other boards and advisory committees. She was the first librarian to be invited under President Obama's Administration to serve in Washington, DC at the Disparity in Treatment of Youth and Men of Color three day committee meeting hosted by the American Psychological Association. Just this past year, her library was awarded one of the Best of the Best libraries by Asbury Park Press readers of Monmouth County.

In accepting the award, she shared her story with hundreds of librarians from around the state and gave credit to the motivation provided by her mentors and colleagues, while alsomaking a point to acknowledge her favorite city, Long Branch, NJ. Tonya stated "While former library director Ingrid Bruck was my primary encourager at the time, the culturally-rich "city by the sea" known as Long Branch provided the soil in which the seeds of my career could grow. It may be strange to compare a city to the public library but if ever there was a city that reflects the ideals of a public library, it is Long Branch. It matters not your color, economic background, sexual orientation, gender or rank, if you seek inclusion, civic engagement and prosperity you will find it there."

Tonya went on to acknowledge that "as a teen mother, I knew poverty. I knew what it was like to search for quarters to pay for just one more pack of diapers to last before the next paycheck. I witnessed firsthand the cycles of recidivism that plagued my own communities and saw the absence of fathers in too many of my own friends' households. And so, I wanted to do my very small part to stop the cycles of poverty in the city that I fell in love with. Therefore, the initiatives I created for the library were and still are very personal to me".

Ms. Garcia thanked the New Jersey Library Association as well as Trustees and Staff of the LBPL. She went on to say, "I consistently tell my staff that as long as we come from a place of good intention, everything else will fall in place. If we lead from a place of good, then our mistakes are not malicious but acceptable ones to learn from. And learning from my staff is one of the great joys of my own leadership and mentorship. I share this award with the entire staff of the Long Branch Public Library. Their commitment to innovation, excellence, and service inspires me to be a better director every day".

Tonya thanked her family, stating "Without my sons and their father's encouragement, I would not be here today. They share their mom with not only the library, but also with the community. They endured a mother who worked full-time while pursuing both a B.A. and an M.L.I.S full-time with no breaks. They support my need to continually do more for the community and are absolutely my biggest champions."

Tonya closed with these thoughts about being a librarian. "As director of Team Jump Off, I was able to encourage 25 teens to take accountability for their future. As director of an urban public library, I am able to reach thousands of individuals, designing services and programs that change lives. One of the great rewards of our profession is the profession and being able to be part of such a dynamic group of New Jersey librarians. l absolutely love what I do. It is no exaggeration that almost daily, I pause during my workday with gratitude for having found this profession, a profession that nourishes me, intellectually and emotionally. My purpose in life is to leave the world a bit better than I found it. Accepting this award is validation that I am living with purpose."