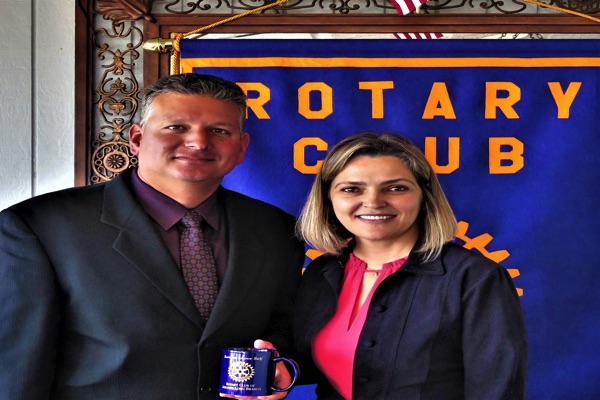 LONG BRANCH: At a recent Friday meeting of the Rotary Club of Greater Long Branch, the guest speaker was the city's Police Chief Jason Roebuck who spoke about the strategies, tactics and actions being used by police, in the city and elsewhere, to combat criminal and illegal activities impacting the community. There was emphasis on the drug epidemic that has increased the size and nature.

Recently re-appointed to head the city's police department, Chief Roebuck described the three elements he is using in focusing resources on these current issues. With 23 years of experience in police work, the last as Director of Public Safety in Long Branch, he has been wearing the badge of public safety in the county and state. He has been a part of protecting the community and its ongoing needs for change in safe living and quality of life.

Chief Roebuck explained the latest tactical approaches that focus on Offenders, Victims and Location as these become involved in police activities.

In the area of "Offenders", the changes have been in laws to address the changing world, such as recent jail incarceration reforms, some including sentencing and decisions for the legal system in directing penalties and corrective systems.

Part of the "Offenders" focus is monitoring illegal activities and individuals as appropriate in keeping trouble off the streets. This gets into rehabilitation, as well as building an obvious police presence that thwarts criminal activities. It deals with information about criminals which helps police to know the who, what, where, when of known culprits in order to prevent repetition. More and better info in timely fashion is a big plus, with local, county and state groups often partnering to provide the info and manage it.

The "Victims" element gets into education for the public about what is happening in the community, providing warning tips about dangers in timely fashion, and having police presence available and readily reachable. This includes those Special Police we see around he city, particularly the oceanfront in seasonal needs.

Police try to be there, with added encouragement for the public so the citizenry can know how to help. For example, encouraging the public to "See something, say something" by calling and alerting police when they see things out of the ordinary. It is an effective, common way to help keep crime under control; Lock your car doors, keeps home doors locked, and don't leave valuables visible in cars or other places, are some effective ways.

The police do all they can to cover this "area" aspect, and public assistance by alerting the police is most valuable. Often crowds of offenders, hang-outs for example, may go unnoticed., The Public, including businesses can help alert the authorities. Businesses can and have helped.

Rotary members were most appreciative of Chief Roebuck's visit. President Luciana Silva presented the Club's recognition award, a Rotary Cup to thank him. The cup bears the Rotary motto. "Service Before Self", which was most fitting for the Chief and his team.

The Rotary Club meets at noon each Friday at Rooney's for planning and discussing programs that address its goals to serve the community. locally and worldwide. Lunch is part of the setting and friendships are part of the vehicle to serve.