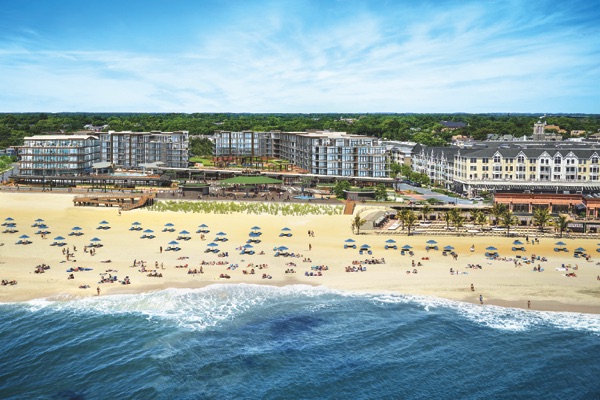 LONG BRANCH: The city has has entered into a redevelopment and project financing agreement with the developers of Pier Village Phase 3.

It has been a long road to get to this point as the Long Branch Planning Board greenlit the project last July by granting the Kushner Companies and Extell Development final site plan and subdivision approval. Since that time, they have been in negotiations with the city to execute a final redevelopment agreement which came to fruition during the Sept. 12 Long Branch Council meeting.

The council unanimously agreed to the redevelopment and project financing agreement which includes a $20 million redevelopment area bond (RAB) that will finance public infrastructure improvements such as the new boardwalk as well as a carousel, children's play area and off-site parking. The debt service on the RAB will be paid back to the city through annual, escalating payment in lieu of taxes (PILOT) to match increasing city-wide taxes and hotel occupancy taxes.

The city originally agreed to a $25.9 million RAB with Ironstate Development, the previous owners of Pier Village, before the group sold the property to the new owners for $200 million in 2014. Kevin P. McManimon, a redevelopment attorney who has been working for the city during the negotiations, said the RAB was reduced to $20 million which will increase the annual net benefit for the city.

McManimon said that the RAB accounts for 7 percent of the total project cost of $283 million.

"We believe that the request from the redevelopers is reasonable and necessary in order to make the project financeable," McManimon said.

Several city residents spoke out against the project during the meeting.

"Gary Barnett (owner of Extell) secured in the last two years $680 million in private financing," Lepore stated. "Why can't he with the wave of a hand do a $283 million project. Why doesn't this city council spare the taxpayers of this $20 million you're about to go with for this project."

The final stage, located just south of the existing development, will include new oceanfront condominiums, a 72-room boutique hotel, new dining and shopping options spread out over 42,300 square feet of retail space, a 370-space parking garage and public recreational amenities.

The developers will bridge the gap between the existing Pier Village boardwalk and the new one built by the city as well. The new and expanded public boardwalk will feature a carousel, a stage for community events, shade structures, public restrooms, and a children's play area with a mist park. Also included in the plans are additional public parking spaces and new stairways and ramps to provide beach access.

The new hotel will have a food and beverage component, oceanfront event space, and a luxury spa.

Construction of the third phase is expected to begin in the fall and the developers have said they would start with the boardwalk construction.