Long Branch's Paramount Theater To Be Demolished This Week 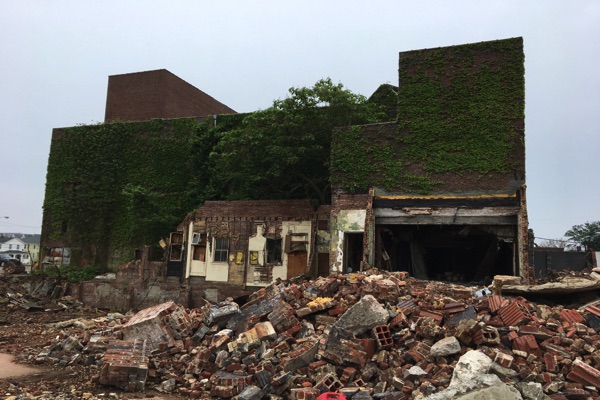 LONG BRANCH: One of the last remnants of Broadway Arts Center (BAC) will be coming down this week.

Long Branch Business Administrator Kevin Hayes said the Paramount Theater will be torn down on either Thursday, June 8 or Friday, June 9.

The structure is one of the oldest in the area and was built as the Broadway Theatre in 1912. The 1,772 seat Broadway began showing plays and vaudeville performances before transitioning over to film. It was remodeled in 1930 by architect Leon Cubberley into an Atmospheric style theatre, and renamed Paramount Theatre.

The theater closed on September 14, 1959 due to declining ticket sales. The Paramount was sold and used as a warehouse for Siperstein's Paint until plans were made to renovate the building in 2005. Those plans never came to fruition, and the theater continued to sit vacant.

In late March, the developers began demolishing several buildings including the original Siperstein Paint Store, Stars and Bars, an old laundromat and the cabinet making business on the corner of Second Avenue and Broadway.

Now, only the Paramount Theater, the building in front of the radio tower, the meat market and Cafe Lapa remain standing in the BAC. Several of the empty lots will be used for overflow beach parking this summer.

Long Branch Partners are expected to present their new plans to the council and the public in the coming months as the city works toward a final redevelopment agreement with the group.