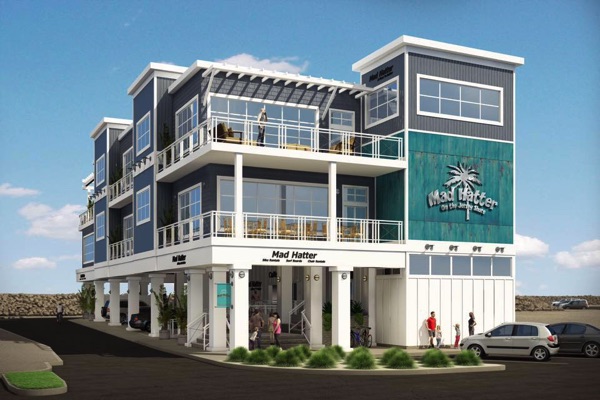 SEA BRIGHT: The plan to rebuild was approved by the borough's planning, zoning board, once again, on Thursday night, May 18.

Owners Amy and Scott Kelly originally received approval to construct a $4 million, 15,000-square-foot facility where their original bar/restaurant was destroyed. The Sea Bright Planning/Zoning Board voted 6-3 on June 30, 2016 to grant Kelly the variances and site plan approval he needs to move forward with the project.

In late September, a neighbor, Jennifer Walsh, filed suit against the Kellys after hiring an attorney during the board's hearing and saying that the larger scale project will be a detriment to her.

During court proceedings, the judge assigned to the cased ruled that the Open Public Meetings Act was violated by the planning/zoning board because it hadn't given notice of its annual meeting schedule to two different papers. The notice was only made in the Asbury Park Press.

As a result, the judge has agreed to remand the matter back to the board which will have to vote on the application again. No new testimony will be heard from either side during that meeting, which has been scheduled for May 18.

The board unanimously voted 8-0 to approve the application on Thursday night, with one board member abstaining from the voting. No member of the public commented on the application, but Walsh's attorney briefly voiced an objection to the hearing.

The matter will now continue to be heard in court. However, Scott Kelly told Word On The Shore earlier this month that he and his wife will begin construction of the new restaurant now that the board has approved the project.

"We are not waiting for appeals by Walsh's attorney to be decided," Scott Kelly said. "We are full steam ahead as soon as we get new approval."

The new new building will be elevated over seven covered parking spaces and a storage area. The first floor will have a bar and dining area and the second floor will feature additional dining space, a kitchen and an outdoor patio bar overlooking the ocean.