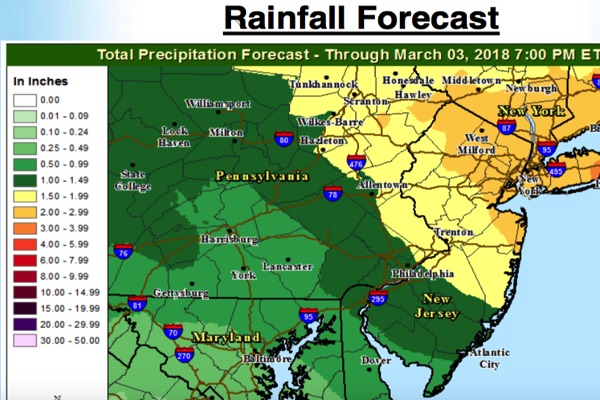 A major nor'easter will hit Monmouth County beginning tonight, March 1, and will linger until Saturday.

The National Weather Service is reporting that the storm could bring between 1-3 inches of rain to the area with the highest totals near the coast. The precipitation is expected to begin late today and move into the state from the southwest before ending late Friday night.

The severe rain forecast has put Monmouth County under a coastal flood watch. The coast is likely to see "moderate flooding" throughout the storm with the most significant flooding on Saturday morning and "minor to moderate" flooding during Friday's high tide

Urban and areas with poor drainage are expected to flood on Friday with possible river and stream flooding into the weekend.

The wind will also be major component of the nor-easter with 50-55mph wind gusts expected for the county on Friday. The National Weather Service is warning that downed trees and power lines are "likely."

Snow is not expected in Monmouth County but the northwestern part of the state could see half of a foot fall beginning on Friday morning.

We'll update this story if there are any major changes to the forecast.