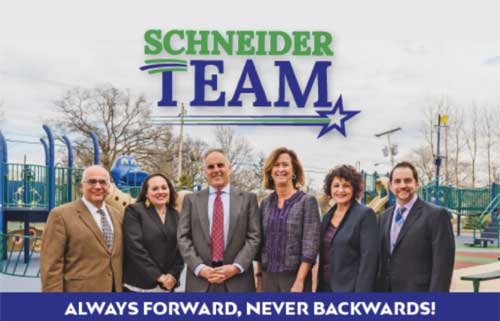 Mayor Adam Schneider stated in his speech, "When I was re-elected in 2010 I made a
promise that I will do this job for as long as I love it and I love it. I love working with this
team, this city and most importantly I love working for you. I will fight for this city
everyday of my life. We started knocking on doors in January and what we are hearing
door after door is that people like and see the progress going on in the city and want to
see it continue. The only way progress is made is by working as a team and that is what
we have been doing and will continue to do."

Schneider Team ticket includes 5 council candidates. Including incumbents Joy Bastelli,
Kate Billings and Michael Sirianni who were first elected in 2010 and are finishing their
2nd term on the council. The ticket also includes newcomer Diana dos Santos an
immigrant from Portugal who is a local business owner and mother of two and Adam
Ponsi a life long resident of Long Branch and a Professional Engineer and currently
serves as the Authority Engineer for the Lakewood Township Municipal Utilities
Authority.

Campaign Manager and former Councilman David Brown Sr. stated, "Adam Schneider
and his team have successfully fought to get Long Branch back on track. Adam and his
team have shown results with a zero percent municipal tax rate increase for two years in a
row. We must re-elect Adam and his team to keep the progress going."