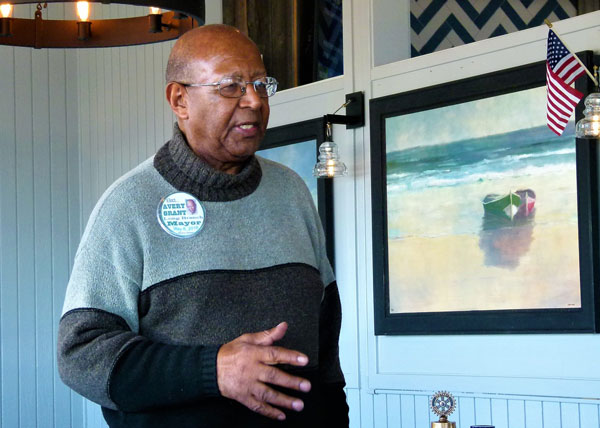 Long Branch: The three candidates for mayor of the city have been knocking on doors, speaking and meeting with the businesses groups and the citizenry.

Word on the Shore has covered candidates Mayor Adam Schneider and Councilman John Pallone's points of view as well as the reasons their selected slate contributes to the city's betterment.

This is an Avery Grant report to also bring his information for readers.

Avery Grant started off in life as the son off a pastor of a church in Memphis Tennessee, later overcoming a bout with polio when he was young, yet going on in athletics, doing well, and later joining the military where he advanced to the rank of Lt. Colonel.

He served in Vietnam and later at Fort Monmouth after moving to Long Branch from North Jersey where he did hold several government positions.

Since settling in Long Branch he has taken several active roles in community affairs to work for the betterment of the city and its residents.

One such role was as a prime leader, about a decade ago, in the Concerned Citizens Group which achieved success in attacking the pollution of the old gas company property along Long Branch Avenue. He succeeded in bringing the State environmentalists and the director of Environmental Protection into a hands-on role of correcting the dangers of the situation, long ignored beforehand.

Grant has served on the city Board of Education and as a strong voice and leader in his church's efforts to aid those in need, including projects and servicing those not able to help themselves due to financial, health and other shortcomings. He also serves on the New Jersey State Work Environment Council and the Monmouth County Office on Aging.

His goals for the city include transparent government, financial improvements through tax reform, and how he feels developers should be contributing to the schools without giving tax abatements, seeking out more access by residents on how they are served, including activities including jobs and for taxpayers beach are access as well as more activities that bring families together and promote more reaching out into the community for services they need.