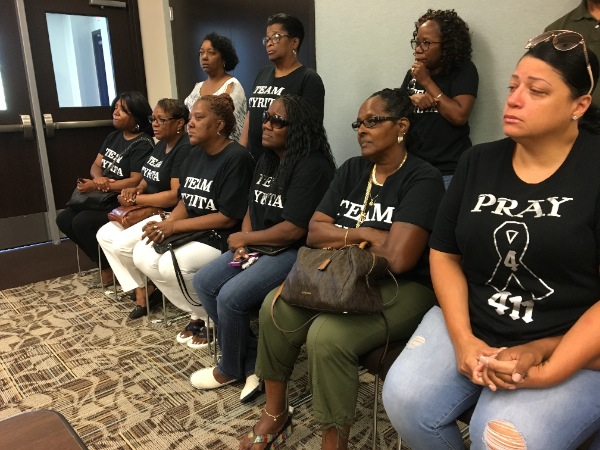 The prosecutors in Monmouth and Union counties jointly announced Wednesday two people are charged with the murder of a Union County woman who was reported missing in March and the subject of an extensive search and investigation.

Last night detectives discovered the body of Tyrita R. Julius, 41, who has been missing since March 8, 2016. Her friend Jennifer Sweeney, 32 of Tinton Falls, and Andre Harris, 32 of Long Branch, are charged with first degree Murder, second degree Desecration of Human Remains and fourth degree Tampering with Physical Evidence. They are scheduled to make their Initial Appearance at 1:30 p.m. before Monmouth County Superior Court Judge Honora O'Brien Kilgallen at the Monmouth County Court House in Freehold. Bail was set at $1.5 million cash only, as set by Monmouth County Superior Court Judge Joseph W. Oxley.

"Significant efforts were made to bring us to the discovery we all feared - Tyrita Julius died a tragic death. Tyrita was not dropped off at the Long Branch Train Station, instead Tyrita was murdered," Monmouth County Prosecutor Christopher J. Gramiccioni said.

"This investigation was a testament to the power of multi-agency collaboration in law enforcement. The outcome could not have been achieved without close cooperation among multiple police departments and the Monmouth County Prosecutor's Office and the Union County Prosecutor's Office," acting Union County Prosecutor Grace H. Park said. "We are deeply saddened by the loss of Tyrita Julius and extend our most sincere condolences to her friends and family, and we hope that we are able to give them some sense of closure by bringing those responsible for her death to justice."

After not hearing from Tyrita, her mother Queen Julius, called the Linden Police Department in Union County to report her daughter missing. Ms. Julius told authorities Tyrita had been spending time with a female friend in Tinton Falls on March 8th, but failed to return home later that evening. Linden Police were advised that calls and text messages to Tyrita Julius' phone went unanswered. Queen Julius also told police her daughter was reportedly dropped off at the Long Branch Train Station at approximately 7 p.m. by her friend Jennifer Sweeney, of Tinton Falls.

It should also be noted that Tyrita Julius was previously the victim of a serious, yet non-fatal shooting in Linden, on Nov. 24, 2015. The Linden Police Department was called to 913 Middlesex Street in Linden in reference to the report of a shooting. Upon arrival, police found Tyrita shot several times in the driver's seat of her vehicle, which was located a short distance from her residence. At the time of the incident, a juvenile was seated in the front passenger seat of the vehicle and was also the victim of a non-fatal gunshot wound.

Additionally, Sweeney and Harris are charged in Union County with two counts of first degree Attempted Murder, first degree Conspiracy, and two counts of second degree weapons offenses related to the incident in Linden. Bail is set at $500,000.

The investigation was led by Detective Brian Weisbrot of the Monmouth County Prosecutor's Office and Detective Kenneth Mikolajczyk of the Linden Police Department.