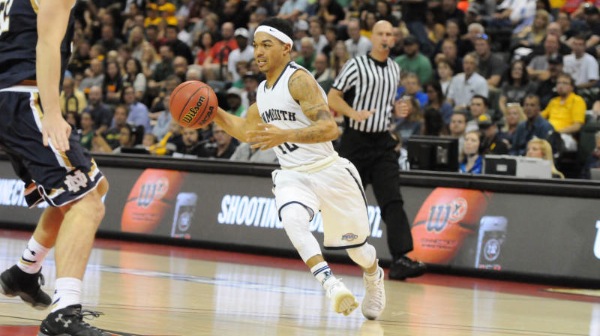 WEST LONG BRANCH: The Monmouth University men's basketball team achieved something it has never done before.

The Hawks defeated No. 17 Notre Dame 70-68 on Thanksgiving, marking the first time a Monmouth University basketball team has ever defeated an opponent ranked in the top 25. The victory was also a landmark as it was the program's 900th victory.

Junior guard Justin Robinson was the star for Monmouth as he led all scorers with 22 points and netted the game winning baskets. Monmouth got the ball with 32 seconds left and the score tied at 68, and Robinson allowed the clock to wind down before attacking the right side of the basket and drawing a foul from Jackson. He hit both free throws with 3.6 seconds to play to make the score 70-68, the eventual final score.

Monmouth advances to play Dayton, who defeated Iowa in the final game of the day, on ESPN2 tomorrow evening at 9:30 p.m. in the semifinals of this year's AdvoCare Invitational.

To read a full game recap from Thursday, click here.