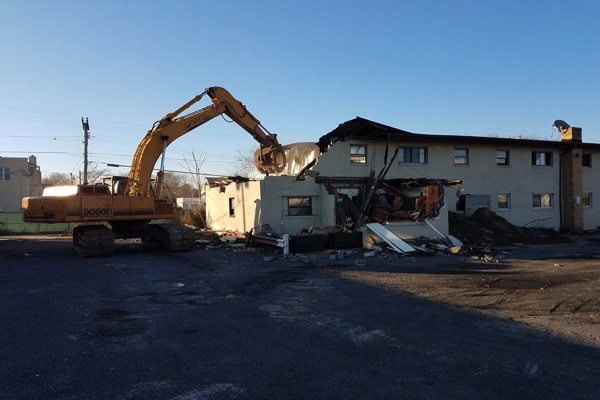 Another building in Long Branch's West End was demolished to make way for Chabad Of The Shore's religious mixed use project.

A small apartment complex located on West End Court was torn down this past week in an effort to expand the parking area for the development. The only building remaining on the site is a long strip of mostly-vacant stores with some some apartments on the second floor. The only remaining business in the strip is Chabad Of The Shore.

Chabad Of The Shore has been given approval to build a mixed use project which includes retail on the first floor and religious uses on the second and third floors.

The C-3 West End Overlay District allowed Chabad Of The Shore to apply to planning board and not the Long Branch Zoning Board of Adjustment, which denied the group's previous plan that did not include retail on the first floor. The zoning overlay allows houses of worship to be placed not he second floor as long as a portion of the first floor contains retail.

That board's denial of the use variance in 2013, caused Menachem to sue the city later that year. The litigation was dismissed as the city and Menachem worked together to create a new plan that was acceptable for both sides.