National Coffee with a Cop Day 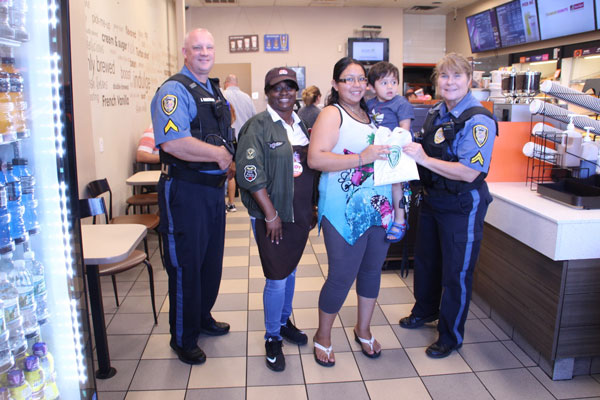 Long Branch: The city and its police force celebrated National Coffee with A Cop Day on Wednesday, October 3 as another step in the programs to build relations with the community and help remove any barriers between police officers and the citizens they serve. .

The now nationwide program began in California, on a local start that was in 2011. It was very successful, gaining lots of attention and the word being spread positively, making its way to long Branch and towns around, a good thing.

In the city, with support of Dunkin Donuts, the sharing was in three spots, Third Avenue, Joline Avenue and Ocean Avenue, three Dunkin popular and easy to reach locations.

The WOTS news met at the Third Avenue spot across from the train station, busy with local people as well as train commuters where coffee and other beverages were accompanied by doughnuts, bagels, muffins, sandwiches and more.

Police Chief Jayson Roebuck had just left to visit the Joline store as WOTS arrived with camera at the ready.

The store's staff, on seeing a cute three year old youngster, joined the two officers so we could capture the happy moment. The lad was enjoying all the attention and the chat with a real policeman.

What a great day.