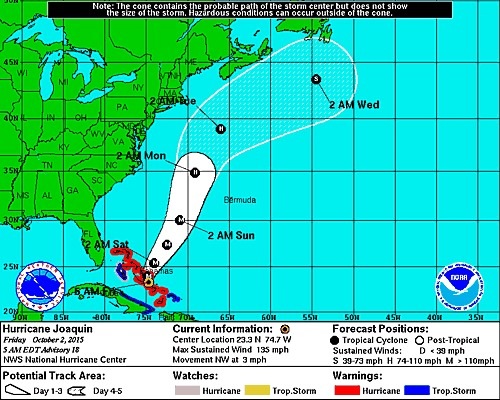 Forecasters are now saying that Hurricane Joaquin will move further out to sea than originally thought and avoid a direct impact with New Jersey.

"The forecast models continue to indicate a track offshore of the United States east coast from the Carolinas to the mid-Atlantic states, and the threat of direct impacts from Joaquin in those areas is decreasing," according to the National Hurricane Center.

The center states that there is still uncertainty in how close the storm could come to Bermuda, extreme southeastern New England/Cape Cod and Nova Scotia during the next several days.

However, even if Joaquin remains offshore, coastal flooding could still occur and nor'easter conditions not related to the hurricane could continue over the next few days.

In Sea Bright, Mayor Dina Long said despite the positive change in the forecast for the hurricane, the borough could still be affected.

"Flooding is expected today and continuing through the weekend due to strong northeast winds," Long said on Facebook. "Plan now for street flooding and high wind conditions. Please secure all property and construction equipment and move vehicles to higher ground before high tides."

Baldanza said Monmouth Park's grand stand parking lot will be available for residents who want to move their cars to higher ground today, Oct. 2. He said water rescue vehicles are also on standby if they are needed.

He asked residents to keep an eye on the forecast as it could change at any time and to sign up for Code Red alerts on the borough web site.

"Residents should not make light of the situation due to the change of the present storm track," Baldanza said. "We are still four days out from Tuesday and the track could change again."