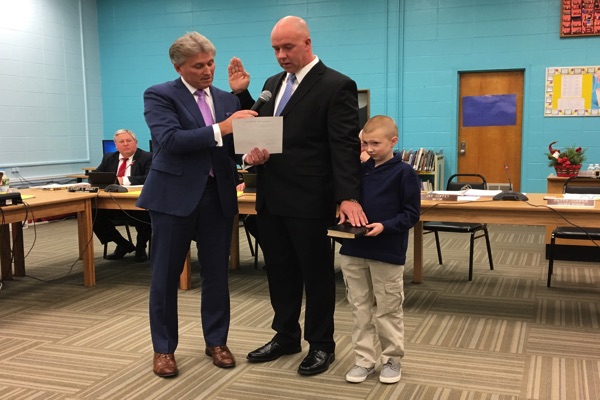 OCEANPORT: The borough council has a new member and his predecessor has been named as the municipal court judge.

Steve Solan was sworn in as the newest member of the Oceanport Council on Jan. 5.

"I would like to thank everybody for their vote of confidence in me," Solan said.

Solan replaces John Patti, who resigned from the council on Dec. 4. Later in the Jan. 5 meeting, Patti was nominated as the borough's new municipal court judge by Mayor Jay Coffey. Coffey said it has always been Patti's "dream" to become a municipal judge.

"It was no secret that John wanted to be a judge," Coffey said. "It's something he aspire to. He eats, sleeps and breathes the law."

However, before voting on Patti's appointment, the council held a long discussion on whether or not he should be the borough's next judge, a position that was held by Helen Stone in 2016.

Council members Stuart Briskey, Patricia Cooper and Ellyn Kahle said they did not like the fact that he was a sitting councilman who resigned in order to get the job. They all said they felt he was competent to perform the job, but did not feel it was a good ethical decision. Kahle said she would rather wait a year before appointing Patti as judge.

Councilman Joseph Irace said he had no problem with appointing Patti this year.

"He is eminently qualified to be a municipal court judge," Irace said.

Ultimately, the council voted 4-3 to appoint Patti with Briskey, Cooper and Kahle voting against the appointment and Irace, Solan and Richard Gallo voting in the affirmative. Coffey broke the tie with a yes vote.

Patti's 3-year term carries an annual salary of $18,500. He has more than 25 years of experience in family law, and is a Certified Matrimonial Attorney by the New Jersey Supreme Court.