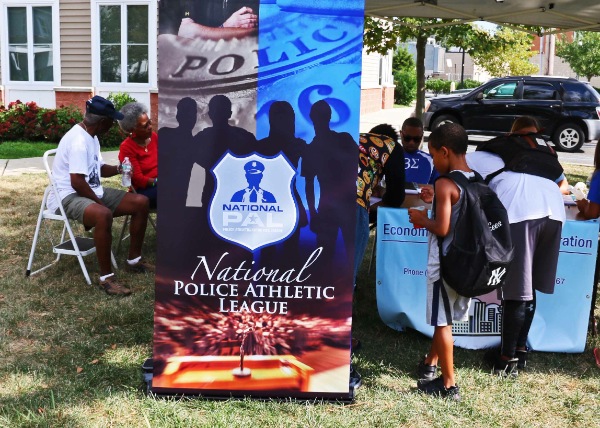 LONG BRANCH: A new chapter of the Monmouth- Ocean Police Athletic League, the Long Branch PAL was begun on Saturday, August 26 at 3 P.M. at the Bucky James Center by the W.E.B. Dubois organization, the Greater Long Branch Area NAACP and the community - its families and the children, 100 in total on Day One

Each youngster signing up received gifts of school supplies in back packs to help them as they learn and grow into mature, prepared citizens. . The original plan was to have a two-day signup, but Sunday's event was not needed. All back packs were distributed on Saturday.

The Men Make a Difference organization and the well-established Howell PAL organization were in working attendance as the registration process was in progress. The back pack awards for signing up were provided by the Howell team who provided the forms and Megan Migioia and a teammate who welcomed youngsters as they filled in their forms.

Programs are in progress to fit the needs of the local community members at the Bucky James Center. To get an idea of programs that have been run in Howell, some perhaps later in Long Branch, go online to www.howellpal.org/. The start list will address mentoring, tutoring, sports, child care, camps and youth leadership, subjects now a part of the Men Make A Difference and other activities at the center.