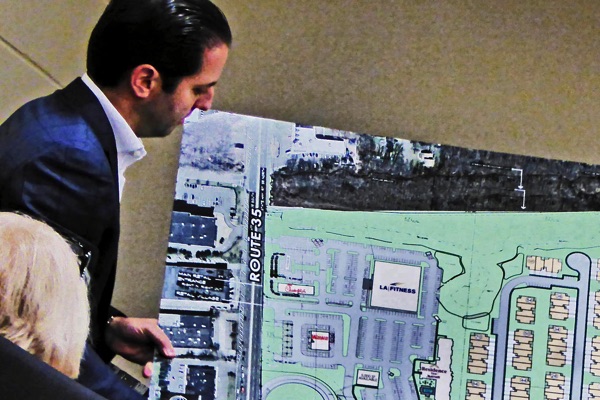 Paramount is planning 70 new upscale homes after an earlier consideration of some 255 originally envisaged, said Paramount Realty President Maurice Zekaria, a longtime resident of Ocean with family in the school system from which he graduated. As explained, the new development will include 70 townhouses, a health club, a convenience store with a gas station, food store, and an upscale 112-room hotel

Paramount's attorney is Jennifer Krimko, who has much experience in development applications in the township. The purpose was to alert council, get their "take" and ideas or suggestions on the part of the township at these early stages of the potential applicant's planning.

Paramount has had discussions with the NJ Department of Transportation (DOT) and locally to understand the traffic concerns that exist and would have to be addressed in their concepts as the development plans move forward, if that becomes their next steps.

Krimko explained to the council that the development work will result in improved traffic conditions than what currently exists. DOT has requirements that must be met and Krimko said the development will embrace those requirements as well as improvements beyond as determined by their traffic engineers and subject to conforming to state and local rules.

The mayor and council are in the process of evaluation of the town's present Master Plan, and input from the board of adjustment, and local shade tree and environmental commissions and Ocean's staff departmental guidance.

During the discussion the mayor and council members had lots of questions, including if the work would include township interests such as recreational opportunities. Paramount is doing a major project for the Eatontown Fort Monmouth site that has several boroughneeds addressed. Though much larger, Paramount showed a high level view of slides swing that much larger, financially committed situation than the plans in Ocean. Suggestions by the Ocean Council were noted.

Paramount is expected to formally file with the plans with township board of adjustment. The informal meeting was to alert the council to the concept, which is still in its early stages, as the council considers its own extensive studies to review and rezone the municipality to update the existing Master Plan and address the future directions and changes that will be determined.

It is too early to set dates for the work as board of adjustment approval is needed. The state and county will be in the picture due to the location of the project, as well as local experts and engineers.