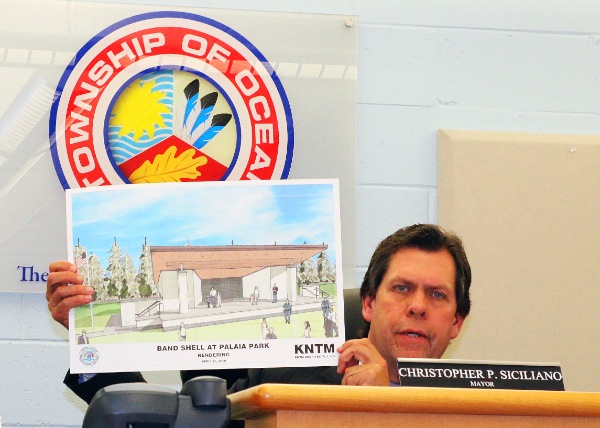 OCEAN TOWNSHIP: The Council meeting on April 28 was begun with an appeal by Girl Scout Troop 345 for blood donors to come to the troop's community service project being held at 103 Monmouth Road, at the First United Methodist Church of Oakhurst.

Girls Scouts Reilly Taylor and Sarah Carroll announced the project will be conducted with the blood mobile bus from 9:00 A.M. to 2:00 P.M. on Saturday May 14. Donors can help save lives. One donor helps three persons in need. If the scouts reach the goal of 30 donors praised, 90 people may benefit. The entire Council is encouraging support.

At the start of the meeting Mayor Chris Siciliano told the attendees that the new entertainment stand at Palaia Park is out for bids and expects this first step finished by end of May, and the costs will not increase taxes since it has already been covered. Hopefully the new stage will be used this summer but an exact date awaits. He showed a rendering photo as he spoke.

Councilwoman Donna Schepiga announced the Memorial Day Parade is May 30 at Township Hall ceremonies at 11 A.M. with the parade itself at 12:30.

The State has provided a grant for a Safety Awareness program for $3800. The shared agreement with the county sheriff's office for computer related services to support call-taking and dispatching functions was approved at $39, 293. The township will pay the Ocean schools $8,000 for 7 buses used in the off season for summer recreation.

During the public portion of the meeting several residents commended the Board of Adjustment's decision to deny the application for a dorm school on Logan Road. Several residents expressed appreciation for support of the governing body to the Board's volunteers, all "hard workers". They thanked the BOA in maintaining the laws they said reflect the views of the community.

Some expressed their convictions that the town respects all religious groups, as demonstrated by the community's good relations with the several Jewish religious organizations that have long been a welcomed part of the community. One resident objected to the use of Facebook social media quotes in the complaint filed with the United States Court's NJ District.

In response to a resident question, Township Attorney Martin Arbus said the case is in discussion by the BOA and the applicants to see where the application goes from here. "We're a long way from "done", he said.