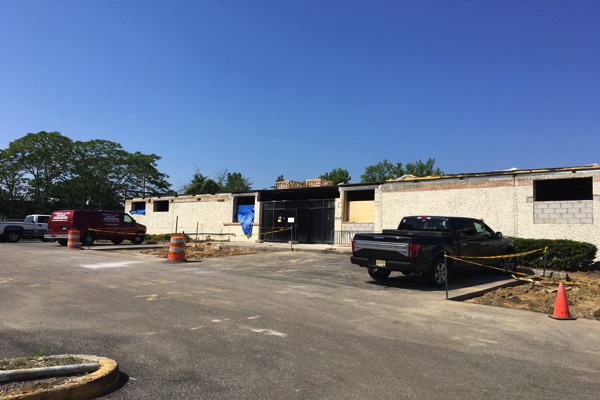 OCEAN TOWNSHIP: The Ocean Township Board of Adjustment memorialized its decision to approve application to redevelop property on 1602 Highway 35 by Cardinale and Ocean Crossing Associates, LLC's for a Use variance, a Bulk variance and a Site Plan. The applicant has a similar business in Millstone Township, a much larger installation in a more rural location, it was said, and some residents and board members were invited and visited that site.

The applicant wishes to open a dog boarding and day care center in an existing business building with appropriate modifications to the property and it usage for the new use. The property has been idle as the former business, a health fitness center, has been closed for some time. The approved Site Plan was the result of hearings and meetings with Board members and technical experts as the original request was modified to meet B of A requirements.

The decision vote took place at the January Bard meeting and was finalized (memorialized) on February 16, Hearings had been held on October 6 and December 15 of 2016 and last on January 30, 2017. Residents had questioned the applicant and its experts in addition to an exhaustive questioning by the Board member and engineering experts.

At the final January hearing residents added their testimony. Some of the issues raised by residents included concern for animal noise, noise and time of day walking schedules of some animals outside the main building, the possibility of dangers to the grounds and nearby resident homes from urination and defecation in an outdoors walk area , odors and. In one case, the health impact on one resident of the adjacent home properties since abrupt sounds can cause health issues that can be quite serious and might require moving to another location. In general the issues were referenced as concerns for the residents' peaceably enjoying their homes.

The Board's order referenced the statements of objectors as "without factual basis and speculation."

The Order said the Millstone site failed to find noise from within that site including from the walk area. Nor were "any noxious odors being emanated from the site". Waste pickups and use of a daily scheduled pickup and odor-friendly chemical deodorants were part of the operations plan of the applicant and specified in the B of A decision.

Dog walking, as needed by some animals would be limited to no more than 7 at a time (originally 10) and trash removal between 9 a.m. and 5 p.m. as adjusted through negotiations of the board and experts, and generally consistent with common practices.

Der dealt with the changes of the original request in agreement with changes directed by the Board. Construction limits and constraints were defined in the order as agreed. Buffers are to be added, trees and tall bushes for the most part, and drive widths and parking spaces in conformance with Board allowance. The Site Plan was presented and Board accepted, subject to actual work that conform soar is reviewed for changes as work gets underway.