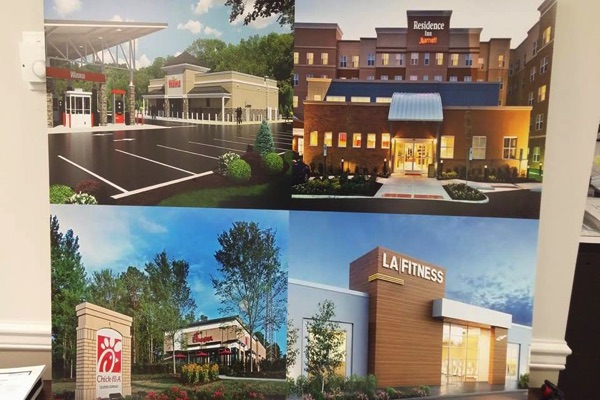 OCEAN TOWNSHIP: As the Ocean Council and its planners are beginning review of the zoning makeup of the entire township, plans for development continue to be brought to the Planning Board and Board of Adjustment. One such plan not yet before either board, in its beginning "Concept Phase" is in the works for the commercial zone at the northeast intersection of Highway 35 and Deal Road.

The concept by developer Paramount Realty was socialized at a recent Council Workshop to get a feel from the governing body before its introduction, if it proceeds to the board and a formal hearing. Board procedures are open to the public as the Workshops. Paramount has agreement with the present property owner conditioned on the plans being able to move forward to the board.

Paramount's owner, Maurice Zekaria, and his brother and partner Lee obtained use of the high school auditorium and conducted their presentation of the concepts plan and invited comment and suggestion from the audience. Lee held a portable microphone as members of the public interacted with the two owners.

While Mayor Chris Siciliano introduced the evening program, he made it clear that the neither he nor the Council had any preconception or approval of the plans.

The concept is to improve the traffic conditions for the intersection, an extremely crowded and difficult to maneuver path for busy commute hours, and even in less commuter time periods. They existing zoning requirements would allow changes that could double or triple the traffic volume, they opined.

The Deal Road/Logan Road intersection east of the highway would be widened and the right turn lane kept, with a Logan Road extension into the developed area continuing north of the present Logan route. A suggestion was made and noted that would move the path onto Deal so the right turn lane would still flow freely even as the light was red.

The new complex would have an extended stay facility (catering to guests who usually stay several days, not just overnight), thus a smaller traffic impact. Plans include a 70 unit "senior-sensitive" group of town houses that would appeal to seniors whose offspring would be out of the nest, and senior business people, thus creating zero to very small, if any, school costs burden on the town.

Included would be a Wawa with gas station front, which raised safety concerns of gas leaks into the nearby stream and a non-attractive facility for appearance sake.

There is proposed a LA Fitness Center, described as a top of the line facility. A Chick Fil A is in the picture, raising comment that a more upscale was more appealing. The sentiment was couched in the desire to keep a better "Community of Gracious Living" appearance to the township.

Some in the audience would prefer the land be rezoned "residential" which it had been years ago. They referenced that actions made by the town a few years back had been caught up in questionable political decisions, they said. The property runs along the highway.

While there were remaining second-wishes, the audience seemed positive on Paramount's bringing the concepts to them before going to the Planning Board. More transparency. They felt the owners had the town's interest at heart, not just the financial picture. At least they asked for input as the concepts move forward.

The photo here is of the northeast corner of the highway at Deal Road. Other photos were shown and questions answered, including about tree cover, which were in the plans to replace or add more than the trees to be removed.

The plans will cover what happens to the wildlife (deer, mostly) and the owners taking responsibility for the care of the deer in the decision to proceed..

Most residents seemed to appreciate hearing the story before it had gotten into the detailed proposal the Boards would be overseeing.