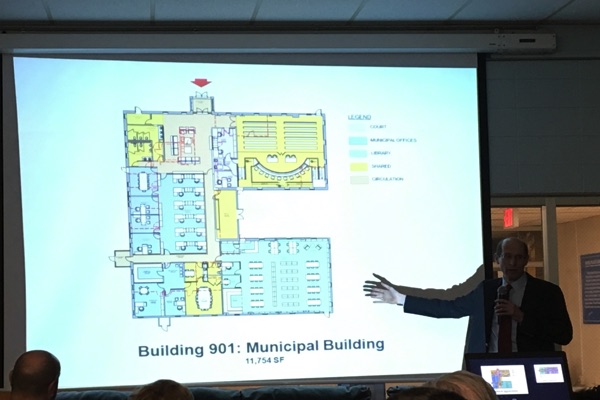 OCEANPORT: The governing body is moving closer to reaching an agreement with the Fort Monmouth Economic Revitalization Authority (FMERA) to create a municipal complex in the 900 area of the former Fort Monmouth.

"We've moved from term sheet to purchase and sale agreement now with the 13.25 acres that the borough is buying in order to facilitate the rebuild of our municipal complex," Coffey said during the council's May regular meeting.

The contract from FMERA is currently being reviewed by the borough's attorney and an announcement on the status of the agreement could be made this month.

The complex would be situated on 13 acres and include several buildings totaling over 40,000 square feet. There are 10 buildings on the site currently, but three will be demolished to make way for more parking. The remaining buildings will be renovated to make way for several borough functions:

• Building 918 for a senior/community center

• Building 977 for the police department and office of emergency management

• A former kennel that would utilized as a borough storage facility

• The buildings currently utilized by the borough's department of public works

Some of the space that will not be utilized initially by the borough at the site could be leased to Sea Bright for the storage of their beach equipment during the winter months.

"We're talking to Sea Bright about maximizing our potential income from dead space," Coffey said. "There's a certain amount of space we're not going to be utilizing right away."

An $11 million bond ordinance was adopted by the council earlier this year that will cover the acquisition and rehabilitation of the buildings. The funding will also cover any design, planning and engineering work associated with the project.

The borough has $7.2 million in funding from FEMA, the county and potential sale of the old borough hall property earmarked for the project which has an estimated cost of $8.4 million. Additional improvements such adding LED lighting, improving the HVAC of the buildings and repaving the parking lot could raise the cost of the project by a total of $2 million. Borough Administrator Ray Poerio has called these types of improvements "alternates" and said the council will have final say on which ones are incorporated into the project.

Poerio said at its current price, the owner of a borough home assessed at the average of just over $440,000 would see an $7 per month increase on their tax bill.