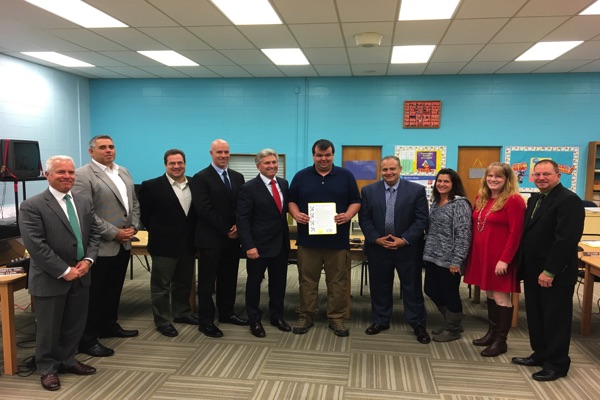 OCEANPORT: The borough's first aid squad captain may be resigning, but he did not do so before the mayor and council got a chance to say thank you to him for all his years of service.

"We've got a volunteer who is leaving us and it's going to create a big hole in our community," Mayor Jay Coffey said when speaking about Capt. Jeremy Dalton.

Dalton recently accepted a job with the University of Pittsburgh medical center as an emergency medical technician.

"I'm going to miss Oceanport, but I have a wonderful opportunity out in Pittsburgh and I'm excited about it," Dalton said.

He has been a member of the squad since 2009 and has held multiple positions and received many lifesaving awards including helping save a resident's life during a blizzard in 2016 and a man's life from the railroad tracks at the Little Silver Train Station.

"Jeremy was the driving source in source behind securing new equipment and replacing old equipment, new training for member such as shooting victim bleeding control and the implementation of a new portable radio system," according to a proclamation honoring Dalton.

The proclamation states that Nov. 2 will now be known as Capt. Jeremy Dalton Day in the borough, much to the happiness and appreciation of the Dalton's family and friends and the governing body.