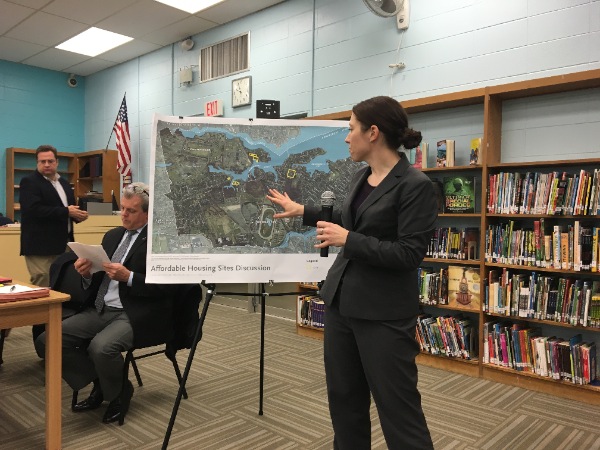 OCEANPORT: Several borough-owned properties are being reviewed as possibilities for a future affordable housing project.

The project came about as a result of the lawsuit filed by a developer in 2005 which stated that the borough was not filling its affordable housing requirements. It is part of the affordable housing plan for the first two Council on Affordable Housing (COAH). Future obligations are still being decided by the courts.

Habitat For Humanity had identified an empty, municipally-owened lot on the corner of Pemberton Avenue and East Main Street as the space where it like the two 1,200-squre-foot homes to be built.

However, the lot is located across the street from the Oceanport First Aid Squad, and is currently used as an overflow parking lot for the building. Squad members and Pemberton Avenue residents said that the loss of the parking lot would cause people to park along the street and in front of homes.

Borough Planner Elizabeth McManus was tasked with identifying other sites and presented them during the Feb. 18 Oceanport Council meeting.

Aside from the Pemberton Avenue lot, McManus said there are several borough-owned lots on Horseneck Point along a paper street called Orchard Drive. A paper street is a road that appears on maps but does not exist in reality and usually occur when city planers or subdivision developers lay out and dedicate streets that are never built.

Of the four borough-owned lots, only two could support housing, as many of them are located in wetlands or within wetland buffer limits. They are also all located in flood hazard areas.

The third site discussed was a 1.8-acre site near the rear of the old borough hall property at the corner of Myrtle Avenue and Monmouth Boulevard. McManus said the only negative with this site is that it also in a flood hazard area.

"Much like a lot of single-family homes in Oceanport and the surrounding area, you are able to construct in the flood hazard area, and you simply have to raise the building so that the first floor of the dwelling it outside of the flood area," McManus said.

McManus said she also looked at several homes for sale in the borough under $500,000 that the borough could purchase and re-sell at an affordable price.

She said the borough has until March 30 to reach a development agreement with Habitat For Humanity for one of these options.

Mayor Jay Coffey said the council will likely have a special meeting to go over these options with the public to help make a decision.