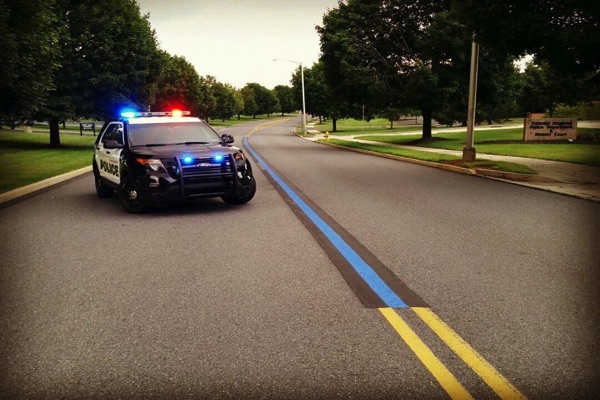 OCEANPORT: The borough may soon join the growing list of towns that are honoring their police officers by painting a blue line on one of its roadways.

The blue line is a symbol that shows support for police officers and their role in the community and is usually painted between the double yellow lines of a street.

Borough Administrator Ray Poerio said he reached out to the county about assisting the borough, but the county said it is not offering that service.

He said he and Councilman Richard Gallo are currently working on getting some quotes on how much it would cost the borough, including the cost of paint and the process of painting the line.

Poerio said during the Dec. 1 Oceanport Council meeting that he wanted council members to think of some ideas for which road will be painted. The length of the line would also have to be decided.

The council agreed that the thin blue line is something they would like to see in the borough.

"I leave it up to you and Councilman Gallo to do it, and I think you may want to include the PBA, because I think in some of the surrounding towns the PBA paid for the cost of paint," Councilman Joseph Irace said.

West Long Branch and Ocean Township are some of the local towns that painted the blue line, and Eatontown officials say they will also be doing it in the near future.