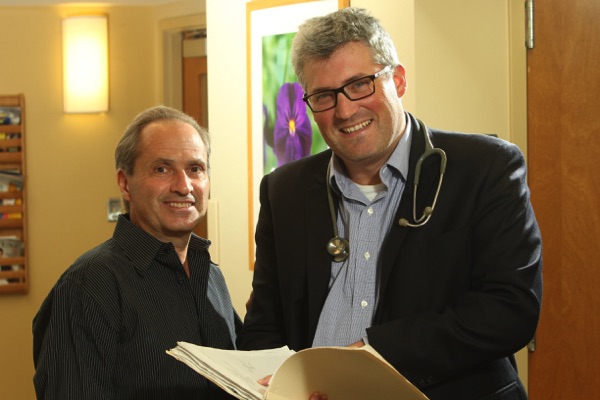 LONG BRANCH: The following is a press release from Monmouth Medical Center:

When John DiDomenico was diagnosed with stage IV pancreatic cancer two years ago, he knew the odds were against him: this disease is one of the deadliest types of cancer.

But thanks to a very rigorous regimen of chemotherapy and what he sees as the unique abilities of his Monmouth Medical Center oncologist, the 63-year-old Oceanport resident today considers himself a "1 per-center" - among the small group of people still alive more than two years after an inoperable pancreatic cancer diagnosis. Today, he is making it his vocation to spread the message that a diagnosis of late-stage pancreatic cancer is not necessarily a death sentence.

"It's my mission to provide hope to others with this disease that are face to face with this very bleak prognosis," John said, noting that the typical survival for stage IV pancreatic cancer is six months. He is also looking to spread the word that it isn't necessary to travel to New York City or other far-off destinations for the very best cancer care (there is no special sauce). He credits his remarkable survival to the care he receives from his hematologist oncologist Seth Cohen, M.D., medical director of Oncology Clinical Research and Outpatient Infusion for the Leon Hess Cancer Center at Monmouth, as well as the hospital's staff of oncology nurses at the Monmouth Vantage Point infusion center, or Angels, as he calls them.

"Seth utilizes a scientific approach, along with a heavy measure of the human touch," John says. "My goal is to give people who have a similar diagnosis hope that survival is an option. Dr. Cohen has the ability to stand toe to toe with anyone treating pancreatic cancer - I don't know that there's another hospital or management group as focused on it, and I really want to spread the word that there is someone right here in our community with an attention and feel for the management of pancreatic cancer. Hope is there for me, and it can be for others as well.

Noting that he was originally referred to Dr. Cohen by his primary care physician, Jeffrey Felzenberg, M.D., for hematology care after suffering a pulmonary embolism in 2011, John said a Thanksgiving 2014 visit to Monmouth's Emergency Department for very sharp pain in his lower right back revealed the dreaded diagnosis of a pancreatic tumor. After seeking opinions in New York at Memorial Sloan Kettering and Winthrop Hospital, he decided to come back to Monmouth and Dr. Cohen.

"I felt very comfortable with Seth," he said. "Yes, pancreatic cancer is deadly, but he is able to manage a very ferocious disease - and his success level is real. I want others to know that there is hope - there is someone right here in our community - no need to go to Sloan or MD Anderson - who is as proficient as anyone treating pancreatic cancer. There is a lot of hope based on results created here, and I want to offer myself as an example of what can be done."

John's wife, Annie, concurred - adding that at their initial visit with Dr. Cohen, he never said anything about having six months to live.

"He said we are not going to talk about life expectancy and urged us not to go on line and look at the statistics," she said. "Seth has always been John's personal cheerleader -- there were days where he would feel defeated, but if he had a visit with him, he would leave feeling so uplifted."

It is estimated that 41,780 deaths - 21,450 men and 20,330 women - from pancreatic cancer will occur this year. It is a disease that is often difficult to diagnose because there are no specific, cost-effective screening tests that can easily and reliably find early-stage pancreatic cancer in people who have no symptoms. This means it is often not found until it is stage IV, when the cancer can no longer be removed with surgery and has spread from the pancreas to other parts of the body.

John is fighting hard against this aggressive disease that has seen him admitted to Monmouth's ICU three times, and in addition to Dr. Cohen, points to the hospital's outstanding nursing care and the additional medical care he has received from Dr. Felzenberg. Additionally, Monmouth Medical Center gastroenterologist Ben Terrany, M.D., treated him for esophageal varices - enlarged veins in the esophagus that break open and bleed. Bleeding must be controlled quickly to prevent shock and death, and John's treatment was particularly difficult due to his advanced illness.

"Dr. Terrany did a great job, it was very difficult to get the varices, and he succeeded," he says.

John also points to the important role genetic counseling plays in a cancer diagnosis such as his, noting that it is crucial not only to identify family history, but also as a demonstration that Monmouth Medical Center is looking to the future in immunotherapy to remedy cancer.

MS, LCGC, who guided him through this process and discussed the results of these tests.

"Cancers are generally treated based on where they have occurred in the body, and we are now beginning to understand the biology of cancer better by characterizing the underlying genetic mutations that cause the cancer to grow and prosper," she says. "This allows for potentially more effective treatments that target genetic mutations that are important for the cancer's survival. John's cancer was sent for this 'genetic profiling' and several potential research-based treatments were identified. Also, due to his family history of colon and pancreatic cancer, genetic testing for hereditary genetic mutations was also completed to help assess risk to family members."

In addition, John credits the holistic lifestyle he maintained before his illness.

"I may have come to this illness in better condition than most," he says, noting that he holds a black belt in Tae Kwon Do and four years of Muay Thai and is a vegetarian who regularly meditates along with a robust supplement routine, and an unlimited prescription of faith.

The treatment regimen, 53 hours in a row of Folfirinox, a combination of three chemotherapy drugs (5-FU/leucovorin, irinotecan,and oxaliplatin), administered first every two weeks and now every three weeks, is very tough, but he said the results have been impressive.

"When I initially saw Seth my tumor markers (CA 19-9) were 125,000 - 35 is normal, and currently my marker is at 35! He has literally taken me out of the jaws of death," John says. "Today all of my tumors have either shrunk or disappeared, so I am resigned to this 'waterboarding' every three weeks. My body is responding very well, but there is also psychological component that is as difficult as the physical one, and I make sure to I take care of myself psychologically as well."

A former entrepreneur, John says that staying alive is now his full time deal. And while the treatment he undergoes is very difficult and caustic, he wants to share the message that there is real talent do deal with advanced pancreatic cancer at Monmouth Medical Center.

"They have the ability here to maintain life in the hopes of finding a cure, or a breakthrough treatment," he says. "If I can give even one person hope, I feel like what I am doing is worth it - to let people know, if you get through one more month, maybe that's the month a breakthrough drug will be found.

John emphasizes that because the message surrounding pancreatic cancer is so negative, the psychological component and family advocacy are essential to keeping people with pancreatic cancer alive. John reminds us that "our vigilance is rooted in our inextinguishable Hope."

"I have a great family who is so supportive of me," he says, pointing to his family, which includes: Annie, his wife of 42 years; 33-year-old expecting again daughter Gabriella, and 3-year-old granddaughter Lucia Susanna, John's joy, a speech pathologist, and her husband Tim, a sales executive; 29-year-old son John, a chiropractor, who regularly manages the physical trauma from the cancer and chemotherapy and his Master of Divinity girlfriend Cora; and his youngest a 20-year-old son Timeo, a Monmouth University Music Industry major; "It is so much easier on them as well as me to have this treatment close to home. They suffer also. Quality moments spent with them are priceless."

"Dr. Cohen knows how to ground the psychological with the physical -- cancer patients today are looking for someone with a deeper understanding of what science and technology have always brought to the human condition - and there is someone right here who truly understands this," he adds.

In addition to raising hope, John is eager to use his story to raise awareness of the need for data sharing and therefore fund-raising for the small group of patients surviving with advanced pancreatic cancer, and funding for research into a cure.

"There are not a lot of solutions, and finding solutions will only come through a sharper attention, and money," he says. "I will do anything I can to help raise awareness - I want charitable value to come from this."

For more information about cancer care and the services available at The Leon Hess Cancer Center at Monmouth Medical Center, call 732.923.6575.