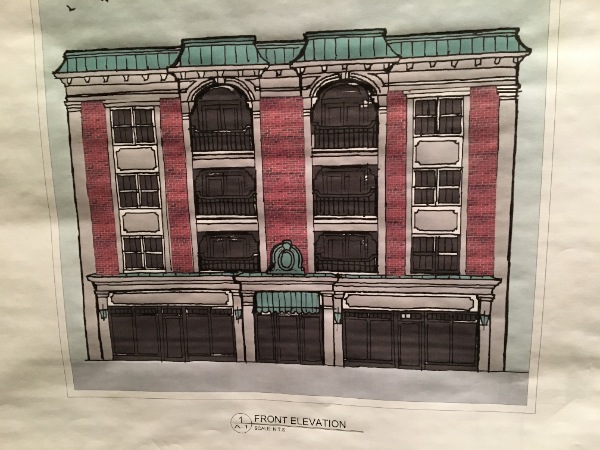 LONG BRANCH: The owner of a Brighton Avenue lot has presented a plan to the Long Branch Planning Board with the hope of rebuilding what was previously lost to a 2012 fire.

Martin Grubman, who owns 57-61 Brighton Ave., is hoping to build a 38.5-foot, 4-story building with 2 retail spaces on the first floor and 12 apartments on the remaining floors. Grubman's original building, which was destroyed by a Feb. 13, 2012 fire along with the building next door, had three floors and more retail space, but he had to add a floor to comply with ADA requirements and new building codes.

Grubman, doing business as Emgee Realty, LLC, presented the plans to the board on Jan. 19 and finished his application before ultimately deciding to carry the matter to the next meeting on Feb. 16.

The board was divided on the proposed project because there are no on-site parking spaces available while 53 are required by the city.In the past, the businesses and renters used a parking lot in the rear of the building and on-street parking. Grubman said he tried to reach a deal with a nearby property owner to share spaces but was unable to do so.

Board member Michael Destefano said he felt the addition of the building brings a greater benefit than detriment to the area because the addition of new residents helps neighboring businesses and that the building "adds character" to West End. Fellow board member Eric Nathanson said people in the area are used to the unusual parking situation and agreed that the project would be a benefit.

"I think it's a lot to grant a variance for," Billings said.

Grubman said in the past his tenants never had trouble finding parking in West End.

Grubman's attorney, Thomas Hirsch, said the city's West End Overlay ordinance, will not allow his client or others in a similar situation to meet the parking requirements.

"If you go by the ordinance, you can't redevelop this area," Hirsch said.

The overlay was created with the intention of allowing smaller projects, such as Grubman's, to share parking with larger parcels in the area, but still calls for the parking requirements.

Hirsch said the architect and Grubman will look at the plans again to see if there are any modifications that can be made to appease the board before the application is heard again in February.