Proto Sworn In To Oceanport Council 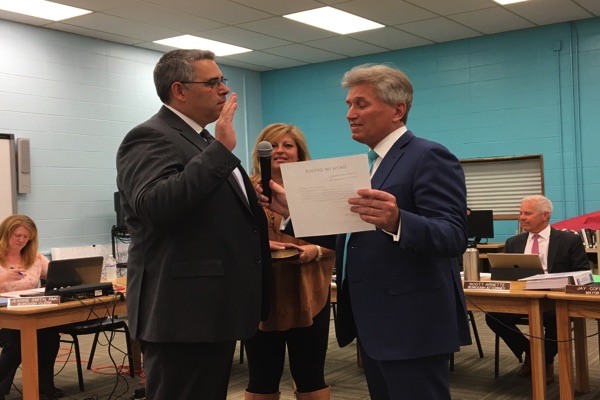 OCEANPORT: The borough council is whole once again as a new member was sworn in during the April 20 meeting.

Robert Proto was chosen to replace former councilman Stuart Briskey, who resigned in March to take a job with Monmouth County.

Proto was one of three names submitted by the local Republican club to replace Briskey; the others were Roseanne Letson and former councilman Christopher Palgia.

Proto is formerly a trader on the American and New York Stock Exchanges and has spent over 20 years in the financial services industry. He has a Bachelor of Science in Finance from New York University He has served as a member of the Borough Council and Planning Board for Upper Saddle River.

Proto moved to Oceanport in 2007 with his wife Isabel and their sons, Robert and Matthew, who are graduates of Shore Regional and are currently attending Drexel University and the University of Delaware, respectively. Proto's wife, Isabel, is a real estate agent with Heritage House Sotheby's, and they both own and manage property in New York City.

He will take over as chair of the borough council's public safety committee which reports on police, fire and EMS activities.

Proto is also running in this year's election to take the seat that will be left by Councilwoman Ellyn Kahle, who has chosen not to run for reelection this year.