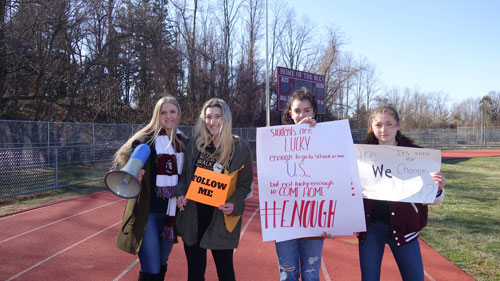 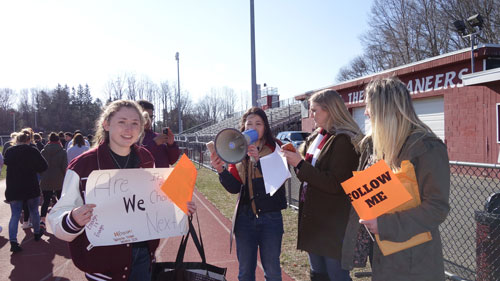 Over 500 RBR students participated in the student-run and mobilized walk-out on March 14 in solidarity with the Students victims and survivors of the massacre which took the lives of 17 students and educators on Valentine’s Day, one month ago 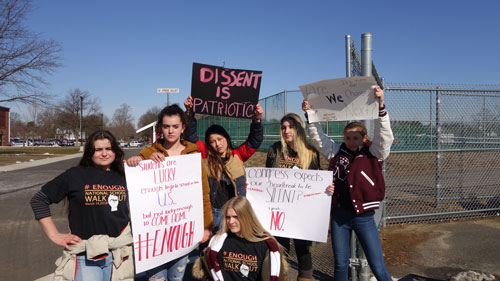 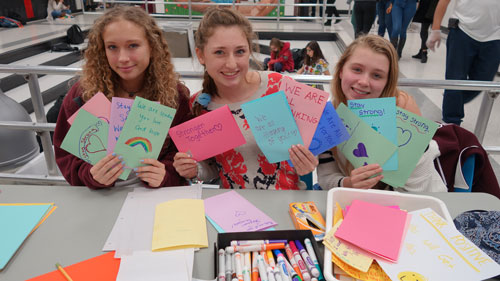 Pictured with the cards (left to right) are students: Grace Winberry, 16,Neptune; Jackie Prestininzi, 16 and Alexa Kirkpatrick, 17, both of Shrewsbury. 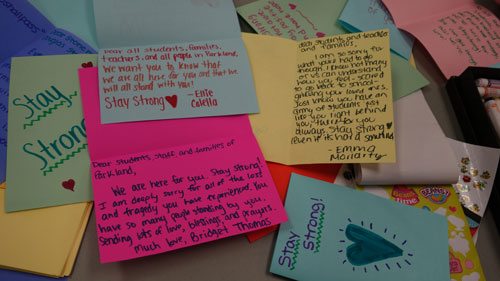 RBR Students Walk Out in Solidarity with Parkland Students

Little Silver: On Wednesday, March 14, Red Bank Regional (RBR) students joined the National School Walkout Day in memory and in solidarity with the Parkland, Fl., high school students who experienced the worst school massacre in US history taking the lives of 17 teenagers and their educators just one month ago. With the permission of their school administration, approximately one half of the student body followed their school's explicit procedures to walk out onto their stadium where a strong police presence was arranged to ensure their safety. The main organizer, 16 year old Claire Taylor, a junior from Ocean Township, led the 17 minute walk with her megaphone. Buttressed by her fellow female activists, they took turns calling out the names of every Parkland High School victim for each minute of the event giving details of their lives and aspirations for a future that would never be.

Claire Taylor comments, "I was thinking what I was going to say last night and just started reading the stories and bios of each one of the victims and began to cry because it was so sad--who got a scholarship to college, and how Valentines' Day would never mean the same to their parents again. The last name I read was Peter Wang. That really got to me because he was shot while holding the door open so his fellow classmates could run to safety."

RBR spent several days the previous week writing special cards of condolence and encouragement to the survivors through the Fellowship of Student Athlete Club. Their club advisor Jennamarie Devito explains, "This was a two-fold good idea since the kids felt relieved to be able to do something and glad it could be helpful for the kids in Parkland."

But the students were also motivated to join the movement that wants to prevent this kind of massacre from ever happening again.

So they donned t-shirts that asked, "Are We Next?" and "#Enough" and created posters proclaiming, "follow me" "Never Again" and "Dissent is Patriotic."

Junior Jackie Prestininzi, 16, of Shrewsbury, who spearheaded the card campaign and assisted in the walkout, comments, "RBR has always been a school to stand out and stand up. I think a lot of kids were very affected by this and something needs to happen. It could have been our school."

Sophomore Catherine Creed, 15 from Highlands stated, "I am so grateful for our right to protest. People may be lazy thinking what difference will I make, but how did America become America?"

The RBR walk-out leaders were as reasoned and eloquent as the amazing leaders of the Parkland High School protest movement. They also study the issues and research the facts.

Fellow Junior, Lucie Chantepie, 16 of Manasquan relates that they are studying civil rights in their AP history class.

She states, "This is a country that was formed by the people and for the people. Soon we can vote, but even now we can put pressure on our representatives in Congress to stop the greed, the NRA blood money over our lives.

Lucie also brings a different perspective as a duel citizen of France; she explains, "This just doesn't happen in other places; this is something out of a dystopian novel."

Jackie also participated in an English classroom activity where everyone was assigned to represent one side of an issue and, supported with facts, real facts, and made cogent arguments. She admitted it was difficult though to support the civilian ownership of military assault weapons like the AR-15 used in the Parkland massacre.

Claire added, "Most kids that have an opposing view to this issue feel we are threatening their second amendment rights. We are not doing that, but you must concede that 18th century laws were not written to cover 21st century weapons."

All the walk-out organizers believe they are "on the right side of history" and agree that they must soldier this mission, through social media, boycotts of companies that support the NRA, and of course voting when they are of age. They advocate sensible gun safety including restrictions that limit the age a young person can purchase a weapon. They agree that the problem goes well beyond the rash of gun massacres noting that thousands of children die every day in this country from gun violence making it the third cause of death in the U.S. among children. They all agreed that the idea of arming teachers to protect students was "ludicrous" with Jackie stating, "Why would you want to introduce more guns into a place you want to keep guns out. That could be one more way of a kid getting access to a gun they shouldn't have."

The Buccaneer, the RBR student-run newspaper, recently conducted a poll among the student body on school safety. The survey results revealed that the vast majority of those surveyed responded that arming teachers would not increase school safety and that gun laws were responsible for the gun violence in the U.S. versus other countries.

Catherine commented on the urgency of the situation stating, "We cannot let this (Parkland) be forgotten. That is what they always want you to do, wait, and then it is forgotten. But if we never stop fighting, there is nothing they can do. It is going to be time to vote and we are going to choose. We can't let anyone forget about this."

Lucie had some tough words for her elders stating, that the previous generation has been irresponsible on this. She adds, "This is our lives on the line. We have to take charge if we care about what is happening in our country, because no one else has our backs but us."

Principal Risa Clay explained that as educators they cannot take a stand on issues that are considered political but are able to allow students to exercise their first amendment rights, commenting, "I am proud of the students who organized this and were able to mobilize the student body. I am especially proud of the way these students came together responsibly, followed the guidelines that we asked and were able to self-mobilize. I am also happy were able to empower them to express themselves."