Residents Will Have Access To West End Beach Soon 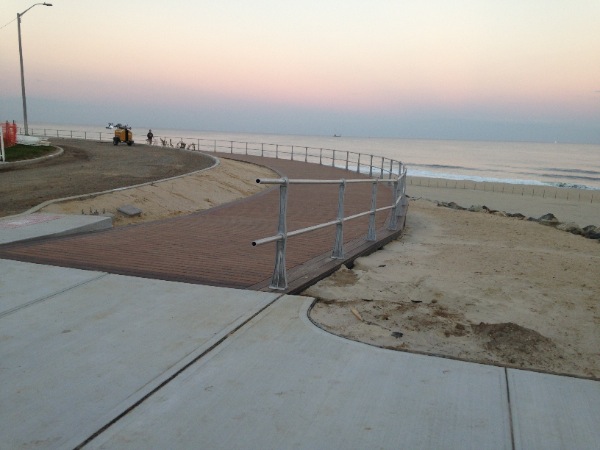 LONG BRANCH: The construction of the city's new boardwalk has progressed to the point where the contractor will be allowing beach access in West End soon.

"Going to open that up soon just to go down to the beach, to be able to access the beach at west end with the stairs," Long Branch Department of Public Works Director Fred Migliaccio said.

The sides of the boardwalk will still be blocked off as the road has not yet been paved and there are some "tripping hazards." The city is waiting on the placement of a new water line on Ocean Avenue, which should start in early November and be installed before the end of the year.

The city was hoping to have paving done along Ocean Avenue in the West End area done before the end of the year, but the installation of the water line has set the project back a bit.

Once paving is complete, there will be a dedicated bike lane and the hope is that the walkers will stay out of it because of the new, wider boardwalk.

"We're hoping this will work better now because the boardwalk is wider," Woolley said. "We feel we can accommodate more walkers on the boardwalk itself."

The benches will also not be on the boardwalk itself and will be placed in the landscaped area between it and the roadway.

City Engineer Gerry Freda said the boardwalk had to come down at a slope that met the ADA criteria so handicapped people could access it and the new comfort stations.

"It has to meet the elevation of the sheet wall also," Migliaccio said. "It can't be any higher otherwise it would need to be 3 feet higher to allow the water to go in and come out."

City Administrator said he feels it is an improvement because the old boardwalk was right along the east side of the road, but now there will be a buffer because of the landscaped area.