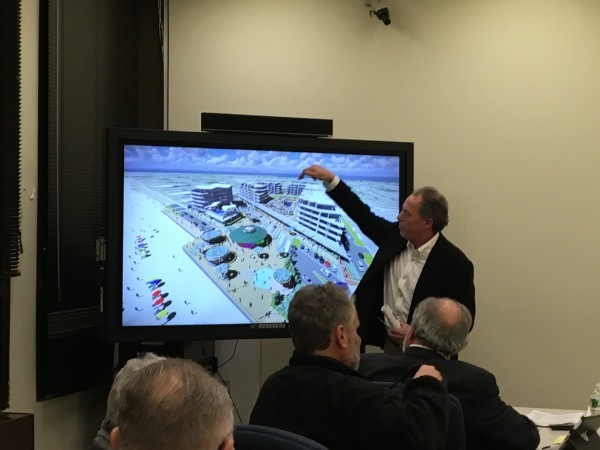 LONG BRANCH: When Kushner Companies took over as the developer for Pier Village Phase 3 in late 2014, it was announced that some changes would be made to the original plan.

The new developers finally laid those plans out during the Feb. 9 Long Branch Council meeting after over a year of working with the city's redevelopment team.

The plans are actually very similar to the original ones with some changes to the size of residential units and the placement of some structures.

"There are several differences in the plan, for the large part of the overall picture, the site plan is essentially the same," architect Tom Bower said.

The third phase of Pier Village will be located just north of the existing area between Melrose Terrace and Morris Avenue.

It includes about 57,000 square feet of commercial space, 269 for-sale residential units, a 79-unit hotel as well as parking and public amenities. The homes will be built two buildings in five floors over the commercial space. The hotel will have five floors and be built over retail space and the lobby area. It will feature a rooftop restaurant, outdoor dining area and pool.

A 2-level, underground parking structure will be built as well

A 42-foot, ocean-themed carousel will also be constructed on the east side of the boardwalk as well as a stage, "misting area," concession areas, shade structures, and beach amenities.

The Long Branch Council later conditionally-approved the developer's plan which will allow them to go for CAFRA approval because of the project's proximity to the coast. The conditional approval also authorizes the city to begin negotiations to reach a redevelopment agreement and assess and possibly modify the $25 million redevelopment area bond that was given to the previous developer to help get the project moving.

Resident Vincent LePore questioned the viability of awarding the bond to the developer, stating that they have sufficient funding to proceed without it.

Kushner Companies Attorney Patrick McNamara said the phase 3 plans will come before the Long Branch Planning Board in the spring for final approval before any construction can take place.