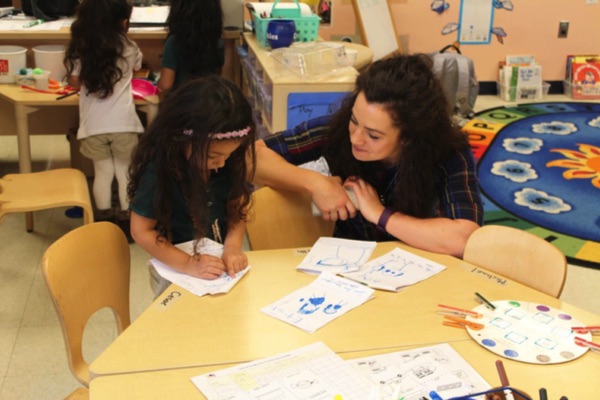 LONG BRANCH: The following is a press release from Kelly McOmber, District Coordinator for Communications and Special Programs of the Long Branch School District:

What does the government of Scotland have in common with the Long Branch Public School District? Both understand the significance of quality early childhood education, and its effects on short and long-term academic and social-emotional outcomes. Lack of exposure to vocabulary and experiences in the early years of childhood (ages 3-5) have led to an unprecedented achievement gap, particularly in low-income districts, and both Scotland and Long Branch are aggressively addressing this issue.

On Tuesday, October 04, 2016, Gillian Horribine, Educational Psychologist with the Perth and Kinross Council, a sector of the Scottish Division of Educational Psychology, left her home country of Scotland to tour Kindergarten and Preschool classrooms at the George L. Catrambone and Morris Avenue schools. Her goal was to explore current research which has shown that supporting children's self- regulation skills can result in 8 months of learning progress. In order to further explore the effectiveness of self-regulation, Horribine needed to see the skill first hand; being taught and used in actual classrooms. In order to inform teaching and learning in Scotland, she requested to observe Long Branch's Tools of the Mind curriculum, which is deeply rooted in self-regulation. In addition to promoting and supporting self-regulation, Tools also helps young children gain early experiences and acquire a more sophisticated vocabulary.

While visiting the classrooms of Meghann Cavanagh (GLC School, Kindergarten), Kerin Oliveri (Morris Ave School, PreK), and Kathryn Stone (Morris Ave School, Pre-K), and interacting with students, Horribine discovered many similarities: extensive use of advanced vocabulary, a deep involvement in role-playing/dramatic play, and most of all, self-regulation. She noted, "There was little to no down time in the classrooms. Students were highly engaged, and knew where they were supposed to be and what they should be doing."

According to Horribine, the Scottish government has made closing the achievement gap a "national priority...we are focused on learning new ways to provide children with early experiences, self- regulation, and vocabulary acquisition, in order to help close the attainment gap. At the same time, we are careful about maintaining play and meeting the social emotional needs of our students." Horribine described the "overwhelming sense of joy" she experienced when entering the classrooms in Long Branch, which is a clear indication of the ways in which the District has found a balance of play and academics in its early childhood centers.

Roberta Freeman, Chief Academic Officer of the Long Branch School District, explains: "Research shows that appropriate vocabulary acquisition, and decoding skills in early childhood are necessary for reading development. As a result of the District's commitment to early literacy skills in Preschool and Kindergarten, we are finding tremendous growth in reading readiness. We have a rich collection of data on children in Preschool through grade 3, which are the "learning to read" years that are pivotal for students. It's truly an exciting time for us."

Horribine understands that for Scotland, like Long Branch, closing the achievement gap is no small task. It requires years of dedicated implementation of a research-based curriculum, like Tools of the Mind, combined with strong teacher buy-in, and continuous attention to professional development for principals, teachers, and coaches. However, once you have a strong curriculum, and an exceptional team of dedicated professionals, the end result can provide children with tools that increase their exposure to new experiences, vocabulary, and self-regulation. Still, perhaps most important of all, Tools of the Mind and the Long Branch Early Childhood Learning Centers, have not forgotten about the importance of play in early childhood education. As Dr. Whelan succinctly states: "The District's Early Childhood Learning Centers have preserved the essence of early childhood, while also maintaining the rigor and expectations needed for subsequent school years."

The District hopes to maintain and develop its relationship with Scotland, as they embark on their quest to close the achievement gap for all early learners.