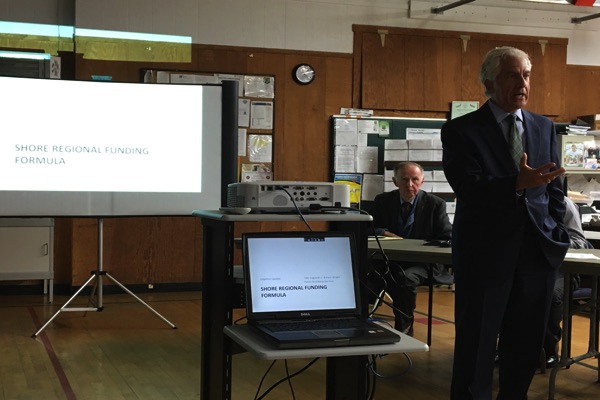 SEA BRIGHT: The borough is continuing a fight to change the regional school funding which began over 30 years ago.

Earlier this year, Sea Bright filed suit against Shore Regional High School in an attempt to change the state's school funding formula and the amount of taxes it pays to the school district. The borough is being represented by the law firm of Porzio, Bromberg & Newman, based in Morristown, which filed the suit in early 2017. Two of the firm's principals, Vito Gagliardi and Kerri Wright, as well as Mayor Dina Long and Sea Bright Council members spoke at a public forum held by the borough on Wednesday, Oct. 4.

Sea Bright originally sent it students to the Long Branch School District, but once the district started becoming overcrowded, the decision to open Shore Regional was made. The borough chose to go to shore a member and not a sending district because it "gave the borough a voice," Councilman William "Jack" Keeler said. The tax allocation method at this time was based 100 percent on pupil enrollment.

In 1975 the New Jersey State Legislature revised the school funding laws to require the conversion of all regional district tax levies to be apportioned based upon the equalized value of real estate. Keeler said this is when the problems started happening for the borough and it culminated in Sea Bright Mayor Andy Manning famously refusing to sign the borough's tax bill to Shore Regional. Manning ultimately gave in and signed the bill

"Your elected officials have been trying for over 30 years to get this thing straightened out," Keeler said.

The borough's lawsuit states that "Sea Bright requests that the Commissioner of Education authorize a public referendum to consider modification of the tax allocation method for Shore Regional to one based 100% on pupil enrollment, as was the tax allocation method to which the voters agreed when they established Shore Regional (in the early 1960s)."

However, the Legislature again changed the law in 1993 to once again permit regional districts to allocate their tax levies on a per pupil basis. The lawsuit states that this gives the school board the ability to change the funding formula.

Long and the Sea Bright Council requested to have the referendum, but Shore Regional Superintendent wrote in a letter back to Long and the council that it was the board of education's (BOE'S) consensus "not to explore the possibility of a referendum to reduce the apportionment of Sea Bright to the Shore Regional High School District."

The letter states that the borough has "been engaged in discussions with Shore Regional hopefully to bring about a change to the formula so that Sea Brighters are not hit with such large and inequitable tax increases in the future."

In order for the referendum to pass, every town would have vote to change the formula; something that Long and the council does not expect to happen. Long detailed the process and how it can fluctuate to either help or hurt the borough.

Last year the borough paid about 14 percent of the budget because there were more of a 2:1 ratio of grammar schoolers to high schoolers. However, Sea Bright's contribution to Shore Regional has increased from $2.1 million in 2016, which was actually a reduction from the previous year, to $3.3 million in 2017. This was due to a ration that was closer to 1:1 this year.

Long said the borough hired Gagliardi and Wright because they were able to successfully sever Seaside Park's sending-receiving relationship with Central Regional High School and get them to go to the Toms River School District. The duo is trying to accomplish this for several other New Jersey schools

"These processes are tortuous but they begin with an effort to get the department of education to give you permission to hold a referendum to vote your way out," Gagliardi said. "These are the hoops you have to jump through before you can litigate any of it."

"Paying attention to that ratio will help to tame this tax beast while we fight for a long term and more permanent solution," he said.

Options If The Lawsuit Is Successful

Councilman Charles Rooney has been saying that Henry Hudson Regional High School, located in Highlands, and educates students from Highlands and Atlantic Highlands is the best bet for Sea Bright.

He said the growth the school is showing and its close proximity to Sea Bright are some of the reasons why he feels it is a better fit.

In the past, the borough has looked at Rumson-Fair Haven High School, but the district indicated it was not interested in taking in Sea Bright students. Long Branch has also indicated that it would be able to handle the students, Long said.